Traffic from Facebook to some of the top news publishers declined at double-digit rates in the second quarter this year according to SimilarWeb’s quarterly web analytics report. SimilarWeb found that Facebook visits to some media companies were down by as much as 50% compared with first quarter metrics.

While some dispute SimilarWeb’s data, other analytic and measurement companies also noted declines in Facebook’s traffic to news sites. One explanation for this decline is the consumer shift from desktop usage to mobile. SimilarWeb is based on desktop only measurement and does not capture the approximately 1.4 billion mobile users accessing Facebook from a mobile device. 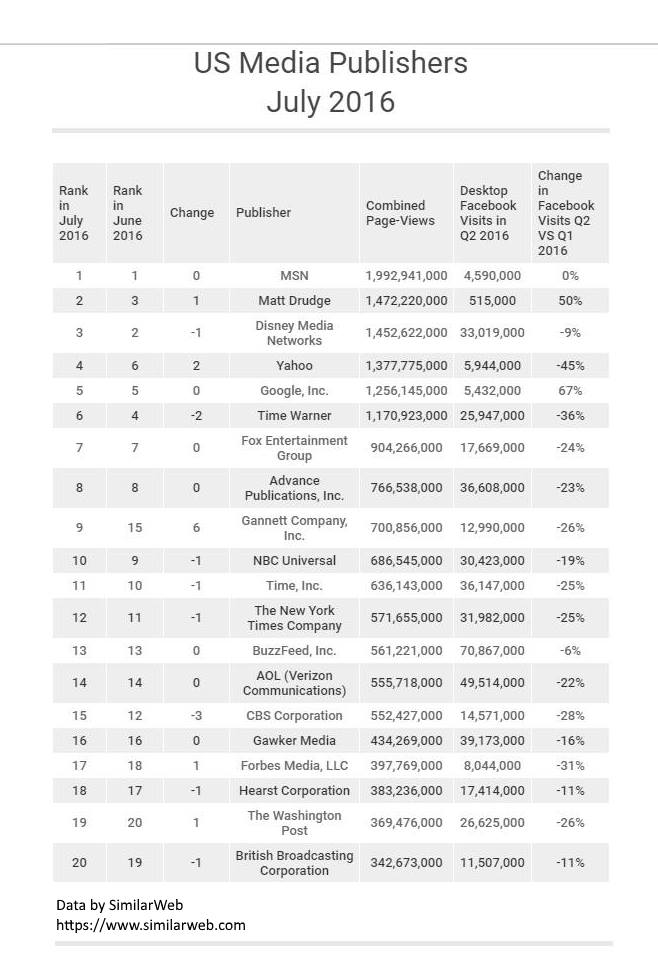 Another reason for Facebook’s decline in distributed traffic is due to Facebook’s announcement earlier this year that it was going to emphasize more posts from a user’s family and friends and no longer highlight articles from mainstream media sites. Facebook’s Zuckerberg announced, “Facebook was built on the idea of connecting people with their friends and family. That is still the driving principle of News Feed today. Our top priority is keeping you connected to the people, places and things you want to be connected to — starting with the people you are friends with on Facebook.”

Facebook’s change in sites ranking algorithms likely impacted traffic to news publishers. The consequences to the Facebook announcement can be seen in July’s ranker. Clearly Facebook’s key goal is to keep users on its site longer. That does not necessarily align with providing quality content from branded news publishers.

Similarly, an article from the Columbia Journalism Review, “Facebook is Eating the World,” clearly identifies the publishers’ predicament: “Now the news is filtered through algorithms and platforms which are opaque and unpredictable.” Publishers are losing control of distribution and increasingly reliant on traffic from social platforms which can be fantastic or deadly to their ad sales business. It’s important for news publishers to build additional businesses and revenues away from distributed platforms. It’s essential for publishers to think in terms of audience engagement measurement rather than scale.