Digital publishers face three market challenges today that are triggering the re-examination of business strategies: 1) an increase in consumption of distributed content, 2) a surge in mobile traffic, and 3) growth in adoption of of ad blocking software. In order to better understand these market shifts and their impact on news consumption the Reuters Institute for the Study of Journalism commissioned a multi-country study, the Reuters Institute Digital News Report, in February 2016.

Digital news publishers, in particular, are rethinking business models as social platforms such as Facebook, YouTube, and Twitter, are now viewed as major news resources for consumers, especially among millennials. In fact, half (51%) reported they use social media as a source of news each week. Around one in ten (12%) stated it is their main source. Further, the percentage of U.S. consumers subscribing to online news outlets has declined from 11% in 2015 vs. 9% in 2016. Many companies are thinking about taking down their paywalls in an effort to attract more users.

While personalization is often a positive experience, consumers are concerned with the personalization of their news content. Personalized content and social media applications often select news stories built on algorithms which are based on a consumer’s reading history, what his/her friends are reading and the sharing, the popularity and recency of an article. Respondents raised concerns with the algorithms selecting their news stories. In fact, six in 10 worry that personalized news applications change the nature of story selection and that they miss challenging viewpoints (60% and 59%, respectively). And half (49%) are concerned their privacy may be compromised.

In addition, the shift to mobile directly attributed to the increased use of smartphones to access news and the decreased use of desktops. Demographically, younger consumers prefer mobile for news access while older consumers look to desktop and tablet. Across multiple countries, over half (53%) reported that they use a smartphone to access news. Interestingly, consumers who report mainly using their smartphones to access news stories, do so by entering social media sites versus a branded website or app. Apps have become an impactful tool to send alerts and notifications to attract consumers and to bring them more regularly to the branded website. 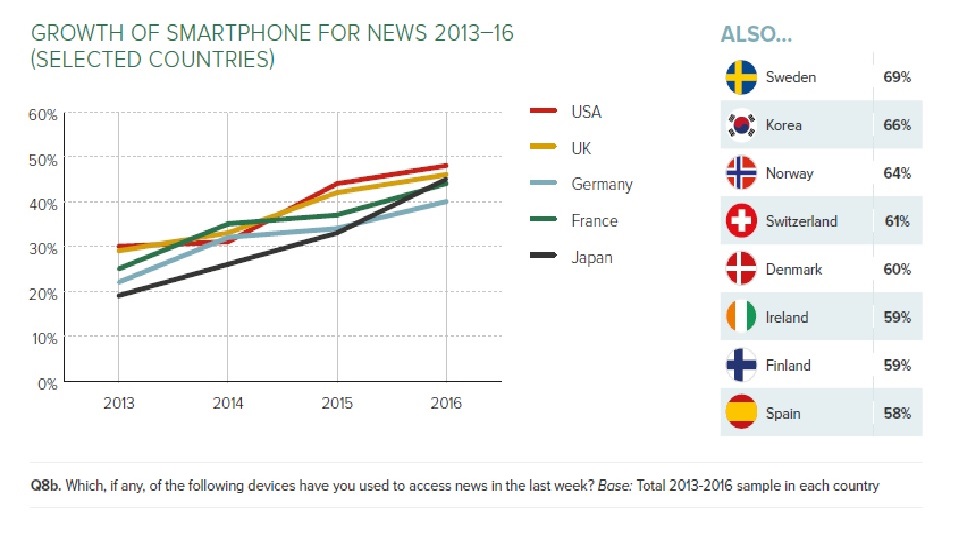 The consumer adoption of ad blocking software is a most challenging problem for digital publishers, especially for those heavily dependent on advertising revenue. Of those that currently use an ad-blocker, the majority do so on a desktop with only about 8% do so on mobile. In addition, about one-third of consumers in Germany, UK, and the U.S. plan to install an ad-blocker on their smartphones in the next 12 months.

In the U.S. the key reasons for consumers using ad blocking software included:

As digital news publishers adapt to the changing marketplace, it’s important to note that consumers still want and value traditional news brands. The Reuters Institute Digital News Report speaks to digital news brands needing to clearly brand their high-quality content and provide a positive audience experience. Further, news brands need to find a balance between destination and distribution and continue to build their brand equity in order to evolve and continue to monetize their content.