Founded in 1995, Salon is one of the oldest online publications. But it’s far from “old school” thanks to an aggressive and innovative approach to content creation, “co-creation, and sponsored advertising spearheaded by Cindy Jeffers, who took the helm as Salon Media Group, Inc.’s CEO and CTO in 2012. Jeffers, who was inducted into min Online’s Digital Hall of Fame last May, is often credited leading a turnaround for the business — one that has allowed Salon to experience unprecedented growth in traffic and ‘buzz’.

But the real news is the increase in audience engagement thanks to edgy and exciting content (and the launch of new content sections such as Tech and Sustainability), proactive social media campaigns and sponsored-content advertising programs that harness tech and video for effective and emotive storytelling. Peggy Anne Salz, chief analyst and content strategist at MobileGroove, caught up with Jeffers to discuss how a strategy sharply focused on social and mobile has allowed Salon to cultivate new audiences and ensure the continued growth of its native advertising initiatives.

You are CEO and CTO. How does having these responsibilities shape your mission for your company?

For us at Salon it’s all about driving the national conversation with fearless, strong, independent voices. It’s also about being platform-agnostic so that we can share those voices and the conversation from platform to platform. The fearlessness, the analysis, and the points of view that we express has to happen on any platform that we’re on. So, technologies matter a lot, but the focus is to get the voices out there on the platforms that matter most to our audience. It’s about the fearlessness of what we do and bringing that to every platform.

The technology backbone is the most critical piece of that. Our API allows us to be platform agnostic and spread the content that we build — whether it’s video, articles or social — onto any number of platforms.

You have been credited with the turnaround at Salon.com — but what measures really get the credit for this transformation?

I was brought on a little over four years ago and since then we’ve really been focused on a couple of key areas: First, we’ve broadened our editorial coverage, and we’ve really pushed into social and mobile in order to expand our reach and reach new audiences. Each of these platforms have very different demographics. We also launched video just last summer as a way to broaden out into more visual story telling. On the advertising side, we pivoted in 2012 to really focus on custom integrations and, more recently, storytelling through video. 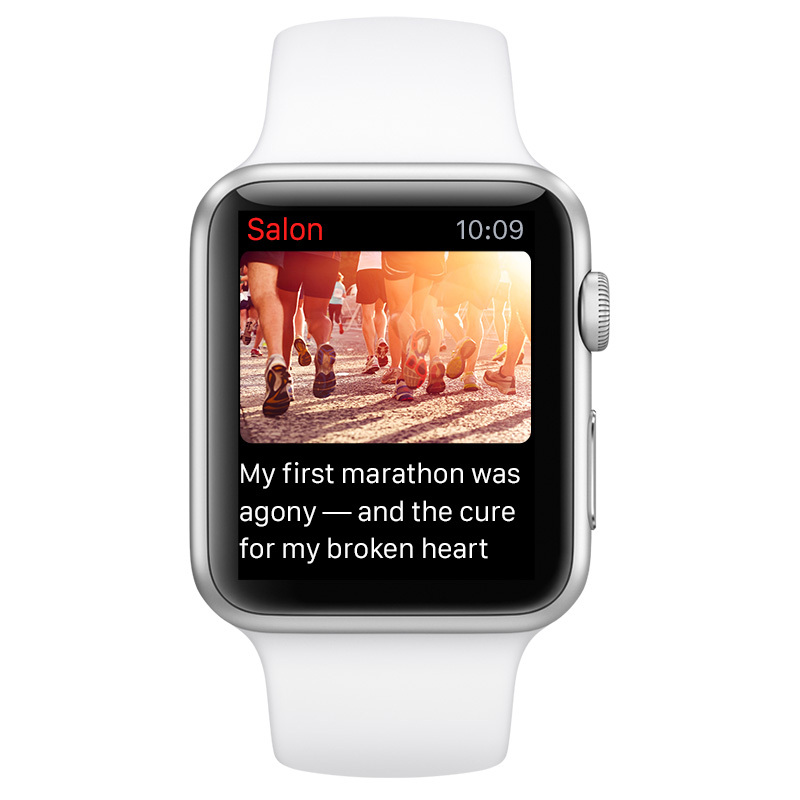 On the product side, our big focus has been mobile. Right now 60% of our audience is accessing our content using mobile. At first had some catching up to do since we didn’t have a mobile browser experience or offer a mobile app in 2012, but that has changed with the launch if an iPhone app, an Android app and then apps for tablet devices. In April, we launched an app for the Apple Watch, one that was timed to day one of the Apple Watch. The focus has been to mobilize and optimize the main site for a mobile-focused experience.

With one in three consumers watch video on their mobile devices, it’s clear that mobile video is eating the world . You are not only using it to enhance your editorial content; you have inserted video into sponsored-content, working with advertisers using video in their storytelling. What is the attraction of video?

We’ve been really excited about video. We launched video on the site in 2012 with third-party video providers such as AOL On. At first, we wanted to get our feet wet and see how the audience would respond. Since then we’ve seen more uptake and more interest in the third-party videos on the site. Based on this positive outcome we decided last year to make it a priority, so we hired video editors and also established a video platform on the site. It’s been amazing to watch the editorial team explore video and see what Salon can build and become on this new platform.

A big part of this is storytelling, and at Salon the process is very collaborative. In fact, Matthew Sussberg, VP of sales at Salon Media Group, is quoted as saying that “when it is done well, native advertising is in the site’s overall editorial voice so that it sounds authentic.” How is that approach progressing and what’s next?

Visual storytelling in general is very popular with our audience and we want to be telling stories that are accessible to them and meet them where they are. For over 20 years, Salon has been home to a lot of amazing writers, but that doesn’t limit us to one style of content or one platform. It’s why we’ve been pushing out into video and mobile — and why we’re also seeing the majority of our audience is there. Looking at interactive and VR [Virtual Reality] I think that there’s a lot more room to grow our brand. For now, video is one of a set of tools we’re exploring to deepen visual storytelling.

One of reasons for the super-sharp focus on video and mobile is because the vast majority of your audience is already consuming and enjoying content on these platforms. What else can you tell me about your audience?

As I said, we’ve focused the last few years on broadening out the demographic — and this is definitely part of our push into new storytelling techniques, new social platforms and new content verticals. And we have been broadening out the mix on the home page as well. Today we have long-form opinion and analysis, but we also are filing timely content that is capturing what is moving through the news at that moment.

It’s the content that appeals to our broad and growing demographic. Certainly, one consistent characteristic across all of the age groups that we serve is that they’re a highly educated group. Having a very smart audience which presents us with a lot of good challenges. It means the content has to engage and empower our audience — and everything we do has to make that conversation smarter. It also means our advertising has to be a lot smarter than what you might find elsewhere. The advertising needs to meet them [the audience] where they are, and it also needs to have a level of sophistication that will actually pull them in. Finally, our audience also consists of influencers across culture, technology and politics.

And this is also why sponsored-content creation is more like ‘co-creation’. Please elaborate on the process since there have been some notable outcomes — I’m thinking here about the campaign when Salon partnered with fashion brand Cole Haan a few years back for its 85th anniversary and the launch of its “Born in 1928” campaign. It was a multimedia campaign with a very effective and engaging social element…

There are certain campaigns that we build in-house. For this we have a creative team that can build custom videos for advertisers and this is a separate creative team from our editorial staff. We also build interactive content. In the fall we did two interactive pieces with Hulu: one was an interactive advent calendar and the other was a crossword puzzle for Seinfeld. Both of those were interactive pieces that lived on the site we created in-house. We also with Cadillac last year on a series to spotlight  creative visionaries across the various creative fields. Another was storytelling and video with MOMA [the Museum of Modern Art] looking at the impact of the Internet of Things on the cultural sector.

So those are some examples where it’s not our editorial team that is creating the content. Instead, it’s a collaboration with a team that really understands our editorial team’s sensibilities and how they relate to the audience. The outcome is content that can live on the site and really match the voice of the site.

You have a highly educated audience and that is what drives your content — not to mention a fearless approach to journalism. But it is also the driver on the ad side of your business, meaning sponsored advertising has to be quite sophisticated. How do you keep the balance between content and content marketing?

Given our demographic and just how smart they are, we are not trying to put anything past them. We are absolutely maintaining a church-state divide here. We make sure to the advertisement label accompanies all of the sponsored content and native advertising content that appears on the site.

That said, we also work closely with advertisers to bring the highest quality content that we can to the site — content that allows us to meet our users’ interest while also meeting the advertiser interest. From our perspective, unless the content is quality content, it’s not going to well anyway, so it’s important to produce content our users appreciate and marketing pieces that can, therefore, also go viral because of that appeal.

Overall, social is very much a part of what we think of as our ‘other homepage’. We don’t think of Salon as just Salon.com. We think of Salon as existing as a brand on many platforms including social. So, posting to our social media pages is just as important to us as getting our content out onto our homepage. Our editorial team is on their social accounts and very active 24/7 on those social accounts promoting the editorial content. Occasionally we work with advertisers that wants to see some of their content to go through that social feed. As long as the content is something that editorial signs off on, then they do promote it. But, otherwise, we determine other channels that it can go out on.

And then there is video to amplify this impact. How does one set the stage for the other and what results can you share?

We’ve been experimenting with video and with uploading videos directly to Facebook, and our Facebook videos have done really well. Two that stand out because they each counted over 10 million views is a rap video that our editorial team made as a mash-up of Palin’s speech with Trump in January and another was a mash-up style video that they did with Trump and teens based on part of The Big Lebowski. These were the first really big viral videos that we had on Facebook. We definitely see a lot more reach through our videos than we had with our written content, so we’re excited about the potential to bring people back to our platform through viral video.

So, in a way, video is big part of what will allow you — and your content — to rise above the noise?

Yes, absolutely. We see video as a big opportunity and an area for growth. Mark Zuckerberg recently said he’s obsessed with live-streaming. I think that we’re starting to see even the social media platforms that haven’t historically had a big focus on video are shifting and starting to explore it. After all, so much video is consumed on their platforms that they really can’t look away from it. It’s the way that people are consuming content.