This week ZenithOptimedia revised its annual U.S. advertising spending forecast to 3.7% increase from its original 3.9% increase. The revised estimate was attributed to reduced advertising budgets in newspaper and magazines. This year’s U.S. as well as global ad market remains strong given media spending for the presidential election, the Olympic games and the UEFA Football championship in Europe. Coupled with this announcement, ZenithOptimedia also release a new study citing the digital’s share of advertising spend will inch ahead of television in 2018.

Magna Global also predicts that global digital media spend will catch up with television’s advertising market share at approximately 38% each in 2019; and in the U.S. in 2017. A Magna analysis reported that digital media is the number one media category in 14 of the 73 markets worldwide including in the U.K., Australia, Canada, Germany, China, Sweden and the Netherlands. The company supportes its prediction with the decline of television viewing. In 2009 television viewing peaked at 31.6 hours per week, this year it is at 29.8 hours watched per week and it is expected to drop further to 27.1 hours per week. One reason for the decline is viewing has moved to digital media platforms where people also watch television content.

eMarketer’s forecast, in line with the others, also suggests that digital advertising spend in the U.S. will overtake TV’s majority share in 2017. Mobile is now accounts for almost two-thirds (63.4%) of total digital ad spending and is the main catalyst for its growth in ad spending. In fact, eMarketer expects by 2020 that mobile will account for 70% of total digital ad spend and will be equal with television at a 32.9% ad spend share.

All three forecasters agree that this is a great opportunity for publishers with strong digital brands to register strong profits especially those offering multiplatform advertising opportunities. 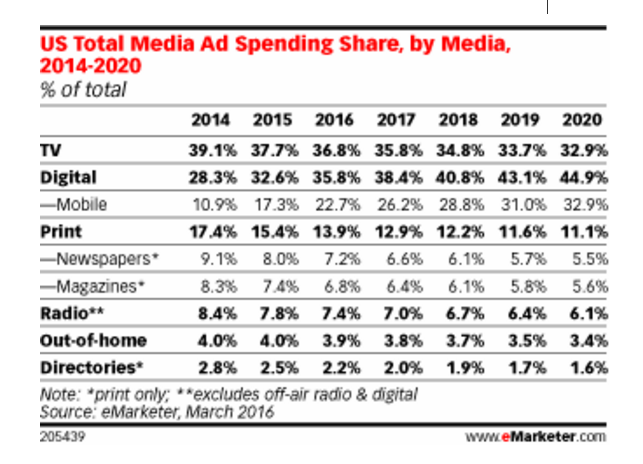