Revenue diversification has long been a focus of media organizations but lately, the rise of ad blocking has underscored its importance. All trusted media brands have built enduring relationships with their customers—audiences and advertisers alike—however, developing new revenue streams is not a one-size-fits-all proposition. Publishers contemplating  new sources of revenue  must carefully consider options that deepen those customer relationships or fill their new or nascent needs while also protecting the power of their brand.

With that in mind, Digital Content Next added a new members-only event to it mix: Power of the Brand, held December 1st at Conde Nast’s new home at One World Trade. The event featured a wide range of non-advertising-based revenue opportunities being explored by media companies. On the Media co-host Bob Garfield—who admittedly spends much of his time chronicling the failure of media to effectively monetize digital—kicked off the day by outlining the dominate revenue strategies that publishers are using today.

Phil Terry, CEO of Collaborative Gain, Inc. set the tone for the day with the revelation that most consumer and product experiences are mediocre because the vast majority of them are created without actually including the consumer in the creative process. In part, he says this is due to “the arrogance of past success,” which can create dangerous product development blind spots.  Instead, Terry says that those leading innovation strategy—be it the C-suite or product managers—need to get out and see how customers are actually using their products. This allows them to identify pain points and genuine opportunities. 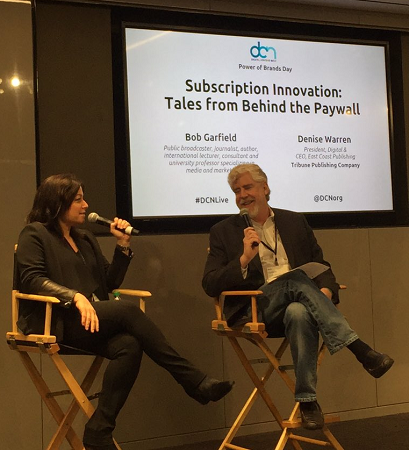 Garfield came back to the stage to interview with Denise Warren, President-Digital & CEO, East Coast Publishing for Tribune Publishing, about one of the toughest revenue streams: subscription models. Warren, who hails from The New York Times (which recently reached the 1 million digital subscriber mark) joined Tribune publishing in May and  has already announced plans to change the way it charges for online content in 2016. The Company will be shifting to the metered model, which Warren said allows customers to decide what sorts of stories are most valuable to them.

However, Warren emphasized that they will also focus on monetizing their most differentiated content—which for many Tribune publications is local investigative journalism. The big challenge in moving customers from free to fee is helping them recognize the value proposition which Warren said requires that they understand the audience. “Then we have to help them understand that we have what satisfies them and scratches their itch.”

Bring the Brand to Life 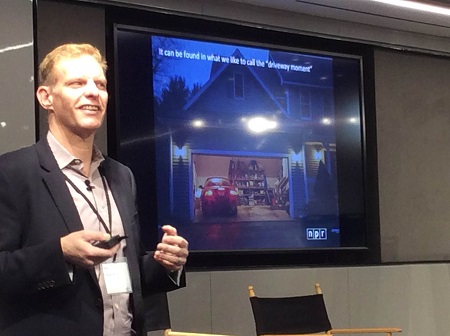 Certainly, this understanding (and subsequent customer satisfaction) is unique to each brand. NPR listeners become super-fans of on-air personalities and, according to Executive Director of Marketing and Branding Alan Feldenkris, NPR is increasingly exploring ways to “monetize that fandom” through live events. Success at NPR starts with brand love and affinity and, Feldenkris said, live events deepen their customer relationships while providing the potential to develop new revenue opportunities.

Fans of Refinery29 rely on the brand to offer stylish, creative and accessible fashion inspiration. CRO Melissa Goidel said it is essential for Refinery29 to remain true to its audience above all. So when they were thinking about New York’s Fashion Week—one of the most exclusive events in the world—they took a different approach and decided to throw a giant party that everyone could attend. The resulting interactive fashion and art event, 29 Rooms, attracted 6,000 live attendees and reached 1 in 6 Instagram users worldwide. While the event had sponsors, the company viewed it primarily as a way to extend audience engagement into the real world. They recently produced a similar event celebrating #MinnieStyle, demonstrating the ability to monetize that engagement.

Few brands garner as much fan engagement as Time, Inc.’s Sports Illustrated Swimsuit Edition but, according to Ian Orefice, Time Inc’s Head of Programming, until recently they had “given away” one of the most exciting aspects of the issue: the cover reveal, unveiling it on popular television shows. Orefice said they had an “ah ha moment” this year and created a sponsored original video in which model Hanna Davis learns she’s that she’s made the cover. He said that Time Inc. is now “trying to act more like a TV production company and think about windowing,” so that it takes strategic approach to video that allows the company to make the most of its assets monetizing them through licensing and other partnerships.

Learn as You Go
For Rodale, its assets include a wealth of health and wellness lifestyle brands, which the company leverages through print and digital subscriptions, utility apps, ecommerce and books. The company recognizes that its customer relationships revolve around the deep subject matter expertise of its writers and editors and is currently beta-testing a new way to offer that expertise to those who want to dig into a subject and learn more: Rodale U. Offering courses on topics from running a marathon to clean eating, Diego Sanchez, Executive Director, Digital Business Development says that, based upon internal marketing alone, Rodale has already driven more than a million people into the platform with a paid conversion rate of over 1%. And just this week, Rodale U debuted its first sponsored course.

Clearly, each of these brands is driven to drive revenue beyond traditional advertising opportunities. But they are driving safely. Throughout the day, the recurring theme was deep customer understanding and creating value for these customers in order to build new roads that lead to engagement and revenue.