The rise of mobile among digital news audiences has been swift and relentless, and in just the past half year has gone from being neck-and-neck with desktop audiences to nearly 50% greater. How has mobile been able to surge ahead so quickly, and what are the implications for digital media economics as audiences shift?

To better understand the audience dynamics in today’s digital news environment, I conducted an analysis of leading digital news properties along with Andrew Lipsman, comScore VP of Marketing & Insights. We pulled together a selection of 25 leading news publishers, which ran the gamut from traditional print publications like The New York Times and The Washington Post to digital-first news entities like Buzzfeed and Vox, and computed their average audience and engagement metrics across desktop and mobile, app and mobile web. 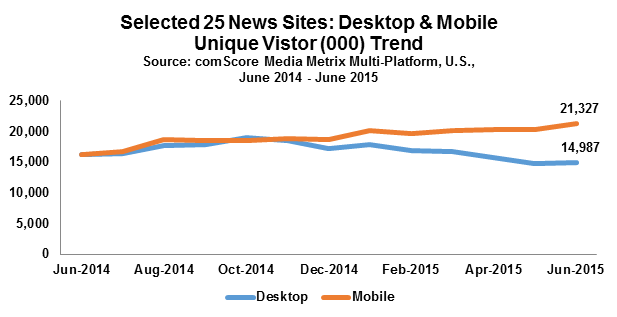 Is Mobile Now Cannibalizing Desktop in the News Category?
The question arises whether it’s fair to suggest that mobile may finally be cannibalizing desktop. But first, some good news: on balance, news audiences are growing overall because the huge gains in mobile audience are substantially outweighing any softening on desktop. So in theory, this should be a boon to the digital news business because bigger audiences should translate into more ad or subscription dollars.

But the economics are not that simple. If mobile ad CPMs are, on average, lower than desktop ad CPMs the potential for cannibalization is real.

What is actually happening in terms of content audiences and engagement? The metrics below suggest that cannibalization might indeed be happening. When we looked at the six-month period beginning December 2014, which marked the start of the trend divergence, desktop news experienced a 13% drop in average audience while mobile news jumped 14% during that span. We also observed a 5% drop in desktop news engagement while mobile engagement jumped 21%. 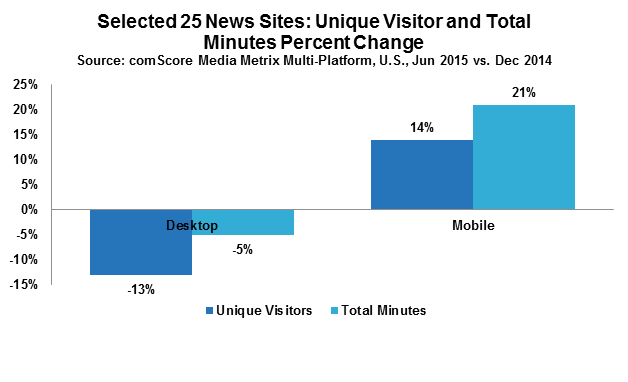 Mobile is picking up the slack for desktop, and then some. And while desktop is in no real risk of cratering, it’s clear that audience growth today is coming from mobile and that digital news organizations should be pointing their strategy in the direction of that opportunity. This begs another important question as to what is the best path for mobile growth: apps or mobile web?

Apps vs. Mobile Web: Which Matters More to News Publishers?When a news consumer reads a New York Times article on their phone, are they more likely to do so via the newspaper’s app or on the mobile web, and which access method drives more overall consumption of content? The answer is while the mobile web is a much more important driver of audience, apps have a disproportionately high impact on engagement. 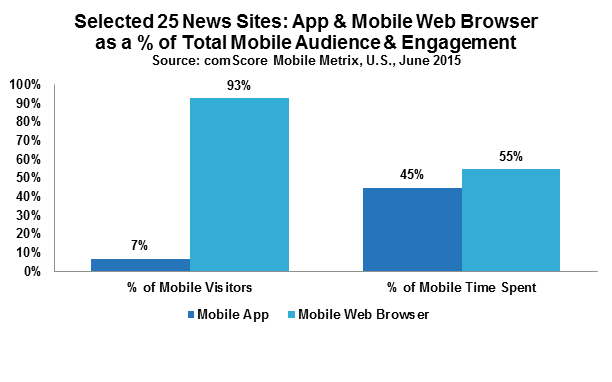 The graph above shows that an overwhelming majority – 93% – of these news publishers’ mobile audiences come from the mobile web rather than from an app. This is likely because many people get their news fix by way of social referral, particularly on Facebook and Twitter. This has the positive benefit of expanding news brands out to new audiences, but many of these “drive-by” visitors are more promiscuous with their news consumption. Loyalty is generally not their forte.

On the other hand, while apps comprise an average of just 6% of the 25 news properties’ mobile audiences, they account for nearly half (45%) of the time that audience spends with those properties. So although news apps may not be the most popular access method, their audience is clearly engaged in a way that the mobile web audience is not.

Someone who absently scrolls through their newsfeed on their phone and opens an interesting story only to close it moments later, might also open the New York Times app and spend a considerable amount of time cycling through each section. How they arrive at that content matters, and how they feel about that brand before engaging with the content determines how much time they’re likely to spend with it. “The mobile browser on a smartphone is a point of convenience,” Dow Jones’ chief innovation officer said recently. The app, on the other hand, “is the place where you discover engagement.”

But – and this is a big but – it’s not enough for a publisher to simply get their app on someone’s phone. The app must also occupy that hallowed real estate – often the homescreen – where users are more likely to engage with it. This is easier said than done. However, there are many clever strategies out there that publishers have yet to employ or even yet to discover.

Jacob L. Nelson (@JNelz) is a doctoral student in Northwestern University’s Media, Technology, and Society program and spent the summer working as an intern at comScore. A former journalist, his research looks at news consumption and media metrics.