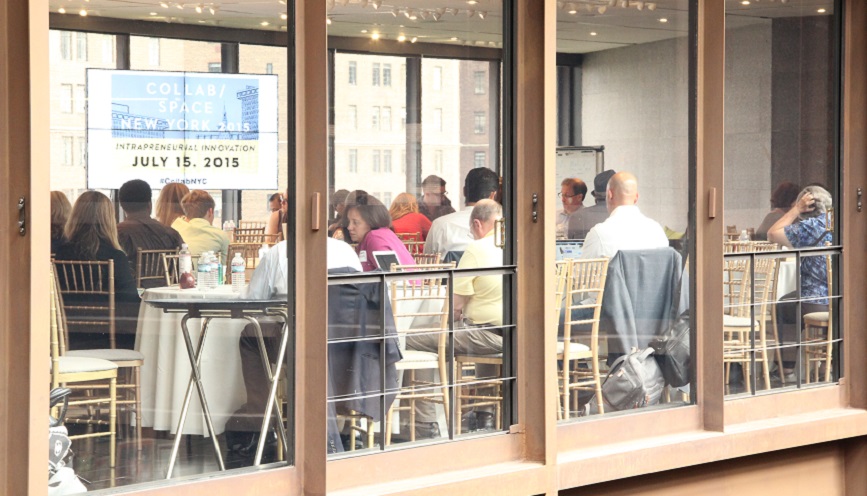 Media Shift’s Collab/Space is a different kind of conference. While a couple of keynote speakers punctuated the day, this event is all about solving problems—and a little bit of improv. The July 15, 2015 Collab/Space New York event—sponsored by the Reynolds Journalism Institute—took place at the Ford Foundation in Manhattan, and focused on “Intrapreneurial Innovation.” People working to get new projects off the ground or effect change at organizations as diverse as Mother Jones, UNHCR, and BBC.com International came out to talk about their projects and get feedback from the industry veterans in the audience. It was clear by the end of the day that media companies of all shapes and sizes are struggling with many of the same problems. In other words, “You’re not alone.”

Post-Print Strategy
Cory Haik, executive producer and senior editor, digital news, at The Washington Post was the morning keynote, and represented an interesting crossroads in the media industry. The Washington Post—bought by Amazon.com founder Jeff Bezos about two years ago—is a legacy media organization known for its top-notch journalism. And now it is in the somewhat enviable position of being owned by someone who not only “gets” digital, but is willing to put resources behind it.

Haik was given a relatively straight-forward task: build a tablet app. But she got one other instruction that not many newspapers—forever protective of their legacy models—would have given to a development team. Haik had to build an app that would have readers reaching for the tablet instead of the print product when given a choice.

The app, which comes pre-installed on Amazon’s Fire tablets, but also available for other devices, is free to Fire users for the first six months, meaning The Post app was also responsible for reaching an entirely new audience. Her team started with this idea: “Digital browsing isn’t easy…but it could be.” They worked to figuring out what worked in the print experience—after all Haik says, “From a product perspective, it’s 130 years old, it’s perfected.”—and move it to the tablet.

Browsability became the key to making a better tablet experience, and The Post opted for a two column experience—keeping the interface simple while still allowing users to scroll through the columns to browse content. It also publishes in two editions at 5 a.m. and 5 p.m. This keeps the content fresh, while also staying in line with what The Post knows about its app users, which is that they read in the morning and in the evening.

One of the other things that sets The Washington Post app apart is just how much effort goes into it by actual humans. Instead of being driven by feeds, each story is designed by a person, who makes sure each image and video appears in the right place. Haik is happy with how the app has turned out. With a team of 21 people on the editorial side alone, though, the next step is figuring out how to integrate more closely with the production process so that the content is ready to be delivered across platforms without quite so much human intervention.

Problem Solving
With that success story in mind, “intrapreneurs” from eight different companies gave short presentations on the particular challenges of their projects, before attendees broke up into groups to help presenters come up with possible solutions to the problems.

For instance, I participated in the Climate Desk group, which is an off-shoot of Mother Jones and brings together climate change-related journalism from eight partners—including The Guardian, Slate, and The Atlantic—and creates original content. All content is shared among the partners. At the end of Climate Desk editor James West’s presentation three challenges were identified:

There were seven other groups, several of which focused on helping media outlets tackle homepage redesign challenges. While many of the issues at the heart of each presenter’s challenge were universal to all publishers—think engagement, multi-platform implementation, and even simple adoption challenges—each one took its own unique shape. After an hour or so of brainstorming, the groups came back together for another keynote speech from Sree Sreenivasan’s, chief digital officer at the metropolitan Museum of Art, and finally presented the solutions each group had defined.

Whether presenters went home with concrete solutions that they can implement in the weeks and months to come is hard to say. However, it was clear that the creative juices were flowing, and audience participants got as much from helping other publishers tackle their problems as the presenters got from having a free team of industry professionals brainstorm to solve the kinds of challenges that are all to familiar to many of us.

Theresa Cramer is the editor of EContent magazine and Intranets newsletter. She is a 10 year veteran of the publishing industry with a background in both newspaper and book publishing. Follow her on Twitter @Cramerstrasse.