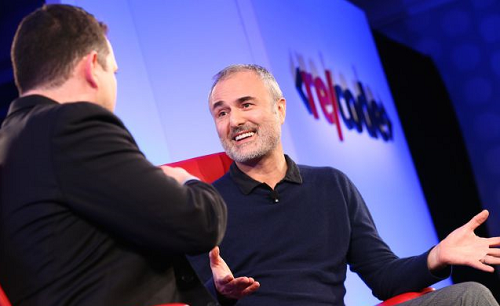 They were the perfect foils:  Chris Cox, Chief Product Officer of Facebook followed by Nick Denton, CEO of Gawker. After dinner on day one of Code/Media, host Peter Kafka interviewed Cox and Denton in a brilliant bit of programming, which juxtaposed these two viewpoints:

Cox represented the evil platform intent upon vacuuming up all data, content and humanity to maximize clicks by us, the “human” robots, to support Facebook’s almighty quest for shareholder growth.

Denton represented the modern-day media czar who candidly–even caustically–fights off the controls of the platforms to protect the sustainable, independent voice for the future.

The problem was that I believed everything they both said.

While original content creators have had a love/hate relationship with Facebook for many years, there was no denying Cox’s eloquence in expressing Facebook’s current ambition to provide better consumer content experiences, particularly on mobile, by hosting content on Facebook rather than on publishers’ own sites. He deftly answered Kafka’s pointed questions about Facebook’s News Feed changes, publisher relationships and user experience decisions like auto-playing video.

To be fair, DCN has cautioned our members about putting too many eggs in one gigantic Facebook basket. And I’ve long rejected the assertion that Facebook algorithms are “neutral” (ultimately humans are behind the math) and I’ve been an active critic of Facebook’s policies around ubiquitous data collection, publisher distribution decisions.

But I can’t deny that Cox was the most authentic speaker I’ve ever seen from Facebook. As a rule, Facebook speakers usually leave me feeling a bit disappointed; like I’ve received the corporate playbook.  But Kafka didn’t throw a lot of softballs Cox’s way and Cox wasn’t ducking.

I witnessed an hour of genuine answers that, regardless of whether or not I agreed, left me feeling like Cox was candidly sharing many of the complexities of Facebook’s global business. He explained how Facebook is different from all “archaic platforms” like Yahoo!, AOL and  Google in that it’s held together by the notion that your friends and family will deliver the best content and info to you. If you agreed with Chris Cox, you should aggressively license content to Facebook’s platform where the largest audience congregates and the most conversations happen every day.

Needless to say, this is not a world view Nick Denton shares.

Denton smoothly shifted gears, channeling (if not quoting) Fred Wilson’s wise counsel to “Be Your Own Bitch.” While not quite the fiery Denton of yore, he deftly navigated Kafka’s many challenging questions. He didn’t flinch from topics that included Gawker’s publishing decisions — including the Sony files and Charlie Hebdo covers  — and Gawker’s relationship with its audience, employee culture, Denton’s public exchanges with his reporters, GamerGate and anything else in the world according to Gawker, where controversy breeds like rabbits.

Denton made it clear that he doesn’t want to be informed about the news by the selections of his friends and family, which take place through some sort of democratic vote. He said that his news habits are aspirational and that he looks to brand experts to make what’s-newsworthy decisions for him. If you agreed with Nick Denton, you would defend your independence from any single platform and focus on engaging in conversations with your audience on your own platforms.

As I stood outside the spectacular Ritz Carlton waiting for my car at the end of the night, I found myself talking to a young student from California Marymount — recalling that BuzzFeed Publisher Dao Nguyen has often pressed me to find millennials to talk to about their media habits. So I asked this student what he thought of the event. He highlighted how much he had learned from listening to one of the event’s earlier speakers, New York Times CEO, Mark Thompson, and then Cox and Denton.

The young man said he was just thrilled to be in attendance as the topics covered at <Code/Media> aren’t likely to be discussed in his classrooms. In his words, “the history books on digital media haven’t even been written yet.”  He’s absolutely correct.  We’re writing them now.  And I have zero doubt that the names Chris Cox and Nick Denton will appear in those books. And I bet, as we look back at this phase of the media business, we’ll find that they were both right. Content matters. Audiences matter. The conversations between the two matter.  And great content conversations can happen everywhere.