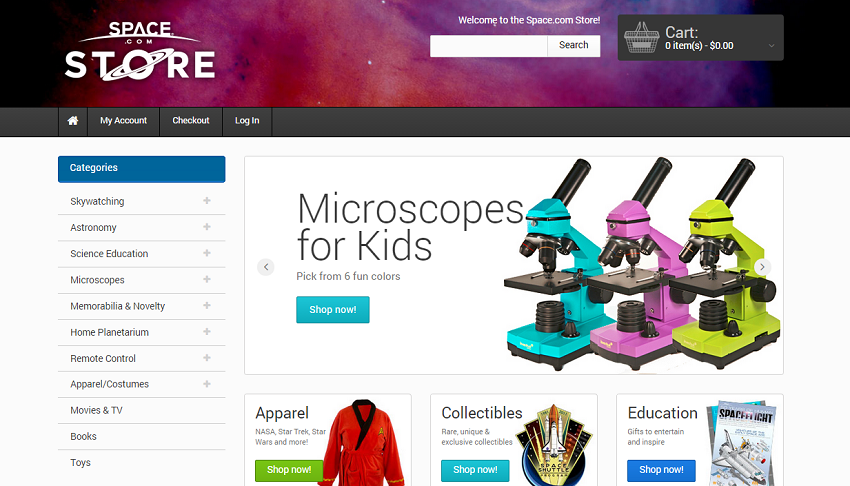 Purch continues to build up its ecommerce offerings with the launch of two new digital storefronts this month, which integrate curated commerce experiences into its top science properties, LiveScience and Space.com. This reflects the company’s continuing momentum to better reflect its mission to help consumers make purchase decisions through content and ecommerce, which kicked off with a rebrand in April from Techmedia to Purch.

The company has been in the ecommerce business for about a decade, according to CEO Greg Mason. He joined the company in December 2012 and has undertaken a series of significant corporate and editorial hires, including the hire of 21-year Consumer Reports veteran Paul Reynolds to serve as Global Editorial Director for TopTenREVIEWS.

Mason says that ecommerce always represented about 10 to 20% of the company’s revenues. “Historically,” he says, “it has been closer to 29%, but now because of our significant growth in other areas, it is less than that. But revenue-wise, it is bigger than it’s ever been.”

So it comes as no surprise that Purch added two new storefronts and has plans for more. The objective is to connect content, commerce and community, and the new stores are designed to facilitate purchase decisions for science and space enthusiasts. They feature products that reflect the sites’ editorial focus — ranging from wearable fitness trackers to telescopes. While Mason says “we want the editors involved in curating the merchandise because they understand the psychographic make up of their audiences,” he emphasizes that “editors absolutely do not have to write about these products.”

This distinction may not seem as important for Space.com, where the editors don’t normally do product reviews, but it is a significant statement for a company that produces TopTenREVIEWS. “Products have to be reviewed completely on their merits…. I think the user obviously wants to know we’re not recommending products because we have an economic stake in that product. Our motives are very clear.”

User experience and design are also factors in maintaining user trust, says Mason. “We can’t say ‘this is rated number one’ and it’s right next to a big fat ad. We have to be really careful that we don’t give the impression that there’s impropriety in this regard.”

Despite some of the challenges faced by content companies considering adding commerce to their revenue mix, Mason believes it should be a given. “Most publishers think about this in an old school way. Consumer attitudes have shifted. They are looking for more logical integration within the environments where they have loyalty.”

Mason believes that the biggest challenge that brands and media companies face today is meaningful engagement and loyalty to their experiences and that publishers need to expand their offerings because consumers have so many choices of where they can go for information. “In this age of endless choice of information sources on the web, it is ever more challenging to maintain that loyal base of consumers who will always rely on your brands and services. As publishers we haven’t thought broadly enough about expanding that full level of services we can create through different mechanisms.”

He says that Purch’s mission to make complex buying decisions easier allows us the company to think more broadly about serving that need. In addition to integrating content and commerce, Mason says that Purch is thinking hard about community. “We’re working to better integrate our most loyal users and get more user participation in the product experience itself. We believe that the future of publishing is not just a marriage of content and commerce, but that strengthening the community is very important as well.”