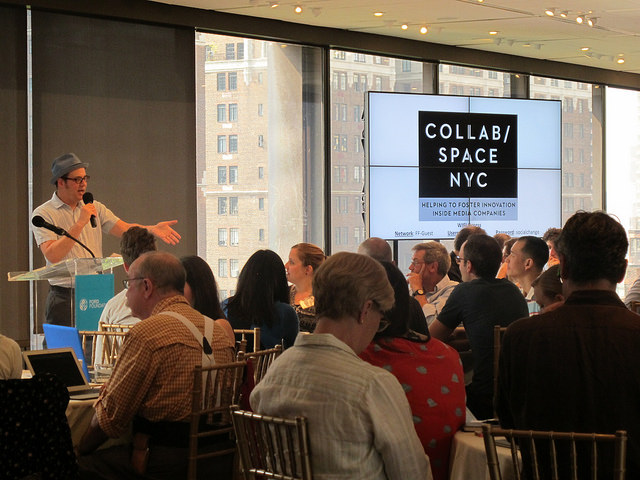 Collaboration is the key to the future of digital media and it is essential for survival, according to Mark Glaser, Executive Editor of PBS MediaShift and host of the brand’s new series of Collab/Space events. This week, PBS and the Donald W. Reynolds Journalism Institute held Collab/Space New York at the Ford Foundation. While the day featured a few traditional presentations, the majority of the format took an innovative problem-solving approach that focused on building actual collaboration within the media industry rather than simply highlighting examples of innovation.

Collab/Space New York kicked off with some ice breaking exercises to set an off-beat and interactive tone for the day, followed by a talk by Atlantic Media VP and GM Kimberly Lau who offered candid insights into how she is trying to increase the pace innovation. While she pointed to Quartz as “a great example of building something from scratch and giving the team the resources they need…without a legacy business to reinvent,” her focus has been on increasing innovation from within that “legacy business.” Though she said that priorities come from the top, Lau emphasized the effectiveness of fostering greater collaboration between editorial and development sides of the business.

This set the tone nicely for a series of five minute presentations from a range of organizations who had an innovative product, development or initiative underway that they wanted to take to the next level. Among the many mini-presentations:

While it included an excellent presentation from News Corp.’s VP of Product Kareem Amin on how he “questioned everything” (and circumvented a fair amount as well) to kick start innovation, the afternoon was primarily devoted to breakout groups that worked on honing their collaboration skills before setting to work tackling the challenges and objectives of the morning’s presenters. As Daily News’ Alderman tweeted, the biggest takeaway was “strengthen your projects through collaboration.” That theme was not only apparent in the enthusiasm the breakout groups exhibited in helping solve the presented problems, but also in the over-arching goal of the day: to strengthen the digital media industry through collaboration among organizations and the passionate people working in them.