These days, media leaders are betting on a cross platform future. Reading signs from advertisers and publishers alike, CoxReps recently launched a new company, Gamut, to offer a full spectrum of support and media solutions. Gamut combines the assets and strengths of what were formerly Cox Digital Solutions and Cox Cross Media to offer a suite of capabilities and a streamlined service for publishers, advertisers, agencies and small-to-mid sized businesses.

Gene Pizzolato, president and general manager of Gamut, says that Cox Media Group started as a group of publishers and that the new company will stay true to that foundation. He adds that the company recognizes increasing convergence in the marketplace and, with the launch of Gamut, will better provide “expertise, efficiency, data, audience and innovation by combining these two aspect of our business.” Pizzolato says the company has seen growth in cross-platform demand, “Brand advertisers are increasingly asking for multiplatform solutions, they want TV but they also want solutions that includes display, digital video and mobile.”

Gamut is comprised of four channels of solutions: Programmatic+, which enables publishers to maximize yield for their inventory with a real-time pricing engine; Reps+, featuring an experienced team that guides campaigns through the full lifecycle; Reach+, a turnkey wholesale product for publishers to generate cross-channel ad revenue; and CrossMedia+, offering custom solutions for integrated, multimarket television-driven campaigns, complemented by digital solutions at a local, regional or national scale.

Programmatic has been a touchy subject for digital media companies. However Cox — and others — are taking an approach that allows them to offer programmatic as part of a range of solutions that leverage its efficiencies while providing other services to enhance marketing outcomes and publisher revenue. “From a revenue standpoint, if you look at our Programmatic+, Reach+ and Reps+, those are pure digital solutions that offer value to both the publisher and advertisers,” says Pizzolato. “We see a big opportunity in our programmatic solution to offer private exchanges and premium direct programmatic solutions to agencies and marketers in 2015. We have a quality base of supply on publishers’ side that is very attractive to advertisers.”

Gamut’s programmatic offering will “cut across three screens,” according to Pizzolato who emphasizes that it will be enhanced by direct sellers through Reps+ and by the organizations’ complementary TV solutions. “We sit in a good place with our publishing partners. The technology we offer is designed to drive yield for publishers, not secure lowest yield, which in turn pays off by them providing us more premium inventory to offer advertisers. Other channels give us the opportunity to drive demand for our publishing partners.”

As the media industry continues to migrate towards the digital landscape, Pizzolato believes that there will be a greater role for both technology and human service in the media buying and selling process. Gamut represents Cox Media’s vision for the future, which is “to continue to offer a spectrum of services that provide best-of-class innovation that adapts with the needs of our clients. This may manifest itself in several forms, but will remain rooted in our core belief that powerful technology, deep expertise, cross-channel capabilities and a streamlined process will provide both our publisher and agency partners maximum benefit.” 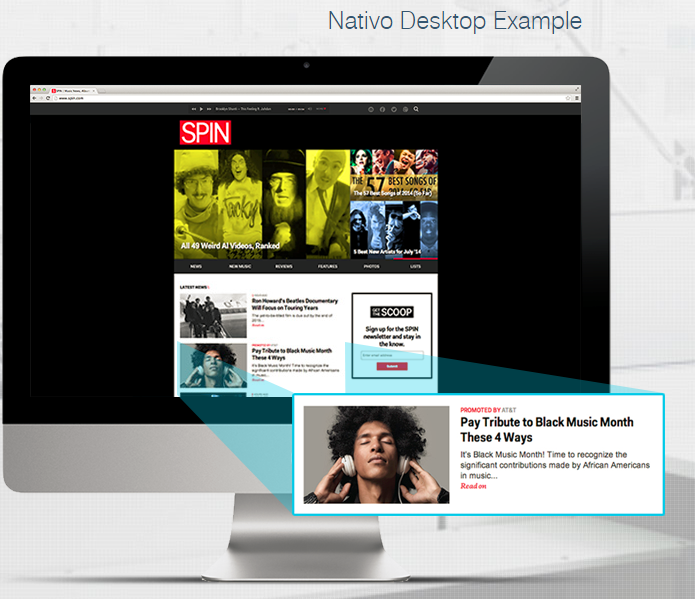 Q: Is “Viewability” ready to be used as a measurement of ad performance?

A: We see Viewability not as a measure of ad performance, but as a measure of ad viability and quality of ad placement. The technology to measure Viewability exists and should be used by marketers to hold digital ad providers to the most basic quality standard for ad placement, i.e. ensuring ad creative renders within the browser and can be seen. Further, as publishers move to feed-based and infinite scroll design layouts, Viewability will become increasingly important to extracting fair value for inventory that exists far below the fold.

Q: How do you work to ensure that ads are viewable and to provide marketers with appropriate and accurate measures for the performance of their digital advertising?

Again, our point of view is that Viewability is not a performance metric, but a necessary quality standard for paid media placement. Viewability should be table stakes for paid media. Ensuring ad creative can be viewed enables brand advertisers to better ensure their paid media, at the very least, has a chance to make an impact with consumers. Without viewability, marketers are forced to measure quality in clicks; a challenged metric that works for direct response advertisers but not for brand advertisers.

Q: Is achieving a standardized measure and method for viewability important?

A: Yes, standardized measures for viewability are important for our industry, provided they are not so rigid that they can only be applied to IAB display and video units. Too rigid a standard will only inhibit advertiser adoption of innovative ad creatives, and slow publisher expansion of non-standard inventory placements.

Native is a prime example of non-standard ad creative (content) and placement (in-feed) where marketers are seeing some of the most exciting consumer engagement and KPI performance in years. That said, it is important that industry organizations and governing bodies establish an accepted understanding of what it means for an ad to be viewable, as well as guidelines and definitions for marketers, publishers and ad providers to follow, including accepted technical methodologies for measurement.

Justin Choi is a serial entrepreneur and founder of Nativo, the premier native advertising platform for digital publishers and brand marketers. Nativo works with major brand advertisers and more than 250 premium publishers and was named “Hottest Startup in LA”. Prior to Nativo, Justin was the founder and CEO of Cie Games, a leading producer of top-grossing mobile and social games, which was acquired for $100MM; and founder and Chairman of Cie Studios, a growing and profitable, award-winning interactive agency focused on digital marketing and custom app development for top brands.