It is official: We are finally “mobile-first.” At the conclusion of Q2, we reached the much-anticipated pivot point when all mobile traffic (direct and referred) caught up with desktop (see chart below). But while we waited, the mobile ecosystem and what we thought we knew about mobile has evolved. Is your media company prepared?

Here are five trends to watch as media flips to mobile-first:

Since January 2017, total traffic from desktop to news sites declined by 14%, while mobile traffic increased by 34%. One of the main drivers for this is the growth in referred traffic from pages using AMP. For news sites, mobile has finally met desktop.

Mobile readers are now more likely to go direct to mobile apps and homepages by typing in the URL than they are to be referred to a site by Facebook. Recent data shows that direct mobile traffic surpassed all Facebook-referred traffic as of mid-October and is steadily climbing. Despite the recent News Feed changes in Facebook which have resulted in declining traffic to publishers (-15% since January 2017), readers still seek out news news, and they are doing so on mobile devices. 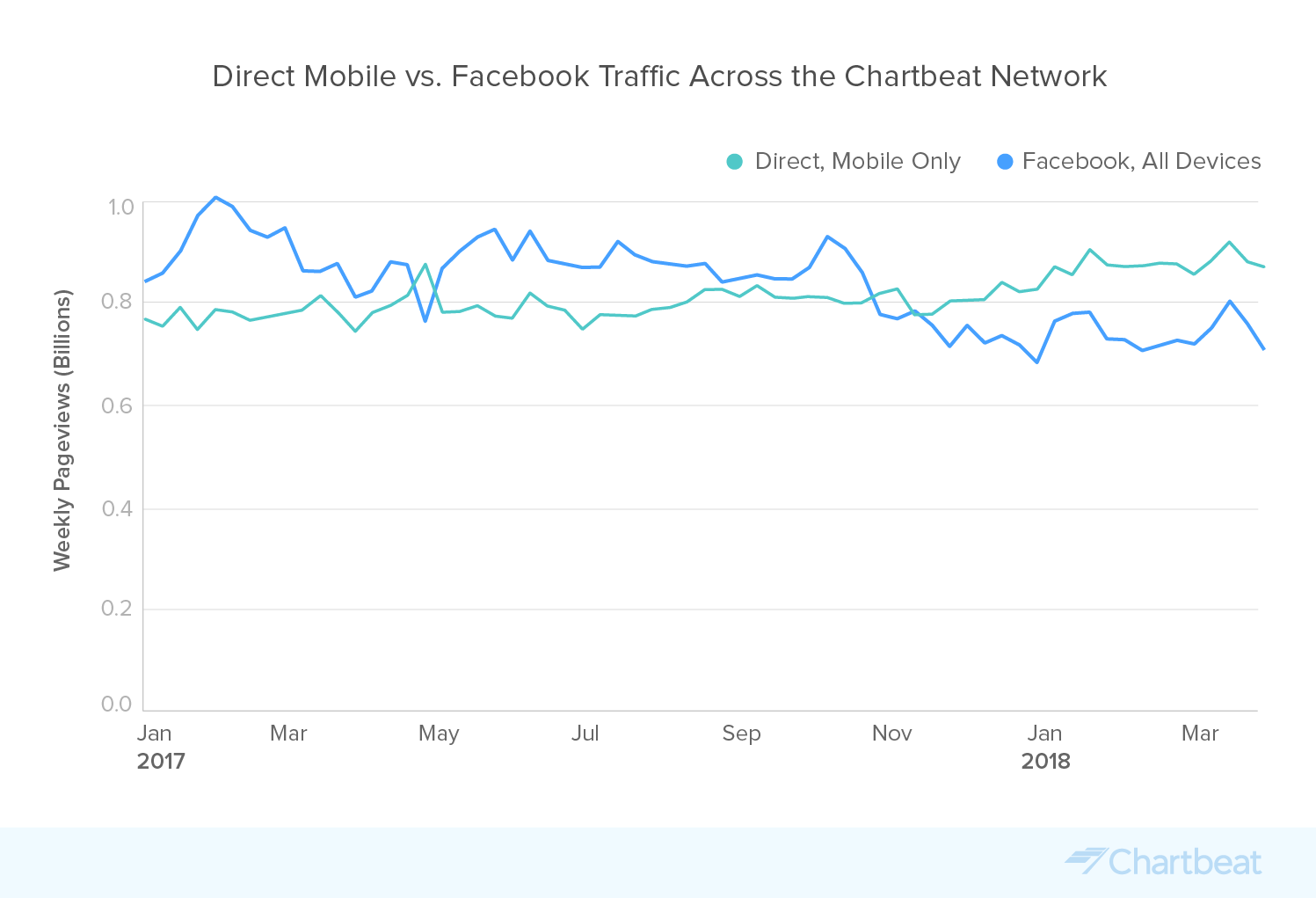 3. The browser: the next major traffic source?

Are discovery tools in the browser the next main gateway to news?

4. The next class of news referrer emerges

In looking beyond Google Search and Facebook, we see that traffic from Twitter to publisher sites has declined by 18% since January 2017 and is now at a similar traffic level to Google Chrome Suggestions. While Twitter may be off of its high, there are very strong gains in the last year from a new tier of news aggregators including the brand-new Google News app, Flipboard, Instagram, and Axel Springer’s Upday app. Here’s what we’re seeing:

All of this indicates that the consumer demand for news via apps has strong momentum, and you should keep a close eye on the growing news app ecosystem as part of your content distribution strategy. 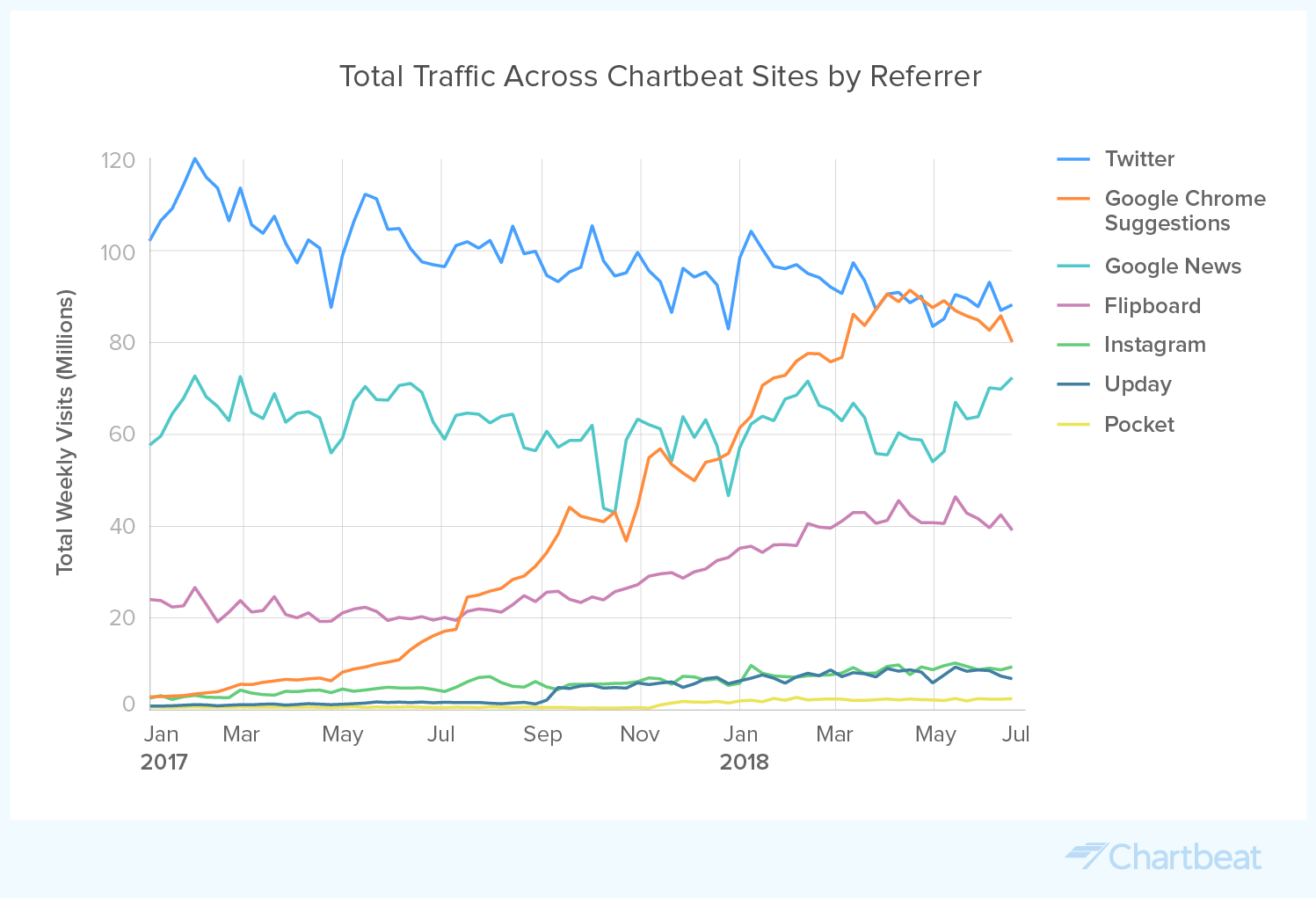 You may think reader attention is more scattered on mobile than on desktop. However, our data shows otherwise, specifically with regard to mobile homepages. On mobile homepages, the average visitor spends 40% more time actively engaging than their desktop counterpart (22 engaged seconds on mobile vs.16 engaged seconds on desktop). While this comparison isn’t entirely apples-to-apples (you could imagine that a reader is more likely to idle in a more information-dense desktop experience), this is a notable reversal of the reading behavior we see on article pages, where desktop readers engage slightly more (38 engaged seconds vs. 34). 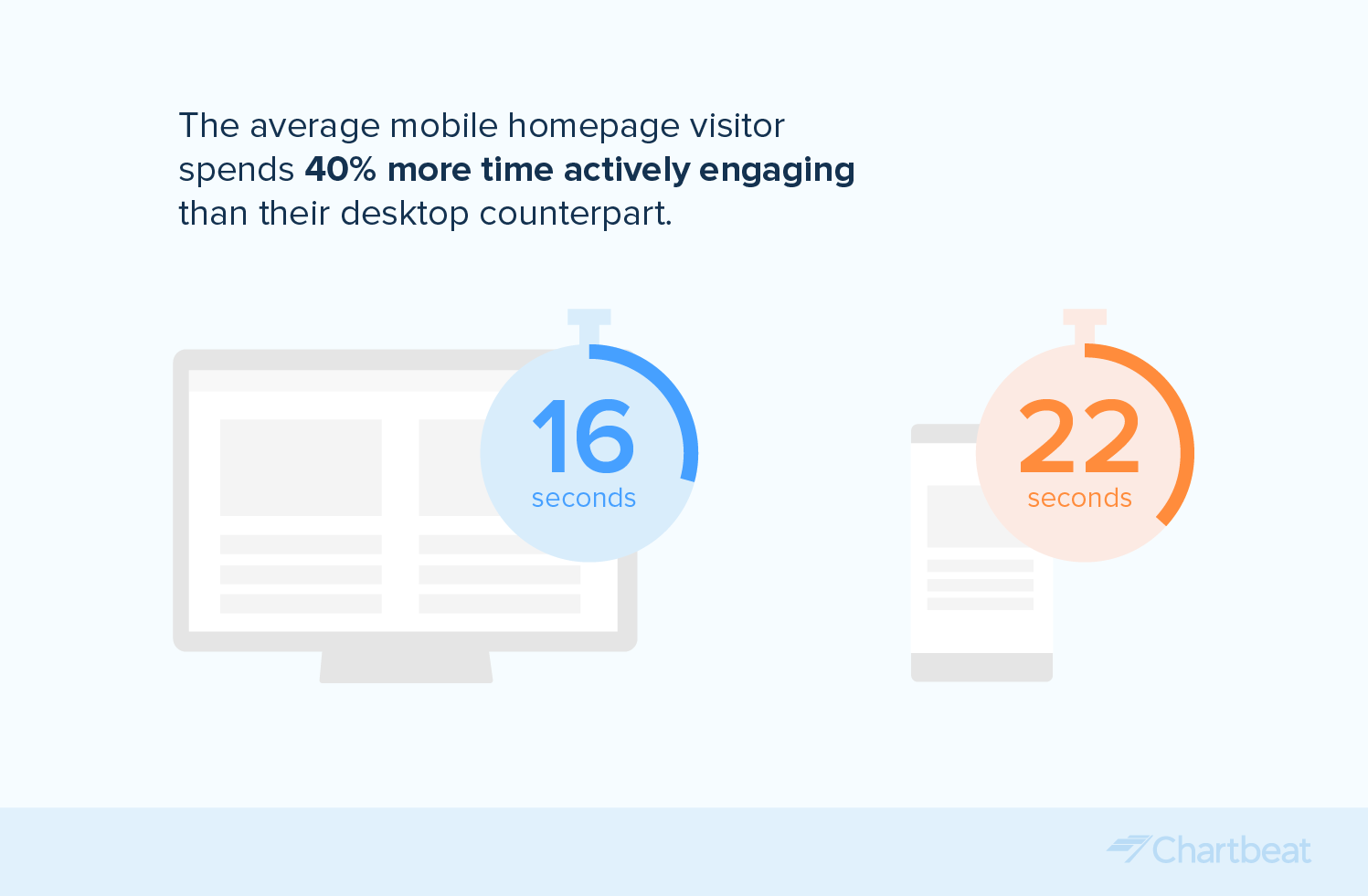 What does this mean in terms of how we value the mobile reader or monetize the mobile homepage?

There is no doubt that the consumer, publisher, and device-maker shift to mobile is driving growth and evolution in how and where traffic flows around content. Consumers are increasingly seeking content directly on publishers’ mobile websites and apps. They are also using news aggregators, where we see a new class of secondary traffic referrers emerging. And with mobile homepage readers more engaged in content than we thought, now may be the time to rethink what we thought we knew about mobile.