The SXSW Interactive festival has expanded beyond its tech-centric past to include panels and discussions on politics, journalism, food, and other cultural conversations of the moment. But among these hot topics is, of course, technology and its influence on the future of these other sectors. From grasping the blockchain to pushing back against tech giants, the festival, in many ways, is media Twitter come to life. (Remember that SXSW brought Twitter to life after the show in 2007.)

But this year certain trends stood out more than others. The show was dominated by politics and ideas – which trumped gadgets and apps. Here are some key takeaways and themes from this year’s festival:

It’s been over a year since the 2016 election, but technology’s role in its outcome, the resulting fallout, and the rise of misinformation and social media warfare has given tech a black eye. Top that off with the outsize influence platforms such as Facebook, Google and Amazon are having over our lives. Those topics and conversations dominated SXSW panels this year.

The back and forth between Facebook director of product Alex Hardiman and CNN media correspondent Brian Stelter during a panel on Facebook and publishers delved deeply into the tricky territory publishers find themselves in, especially with Facebook’s recent algorithmic changes that prioritize friends and family over news outlets. Hardiman, for one, admitted that Facebook has flattened news. However, he insisted that Facebook is not a publisher, much to the chagrin of tech and news experts like Kara Swisher and Christiane Amanpour, who cried foul to these claims during another panel.

SpaceX and Tesla founder Elon Musk’s much talked-about appearance included a depressing take on artificial intelligence: “The danger of AI is much greater than the danger of nuclear warheads,” he said. “If humanity decides that digital super-intelligence is the right move, we should do so very carefully.”

One thing is certain: No longer are we simply enthralled at the latest gadget or the future of tech. Just as the media and tech beat has changed for the journalists who cover them, so too have festivals like SXSW that present the myriad of ways media and technology are intersecting and changing our world.

When the most-talked about marketing ploy at SXSW is an HBO show come to life, that proves that the convergence of Hollywood and technology is complete. The real-life replica of HBO’s show “Westworld” makes the case for investment in experiential marketing to drive brand attention. Certainly, SXSW attendees will recall the show when it returns for a second season. And with the way the news cycle seems never-ending, brands and shows that draw attention to themselves outside the digital world and in the real world can elicit interest and help ensure audiences won’t scroll past them.

To further reinforce Hollywood’s SXSW impact, look no further than the premiere of Steven Spielberg’s new film, “Ready Player One.” Set in a dystopian future where the characters spend their lives inside a virtual reality system. SXSW is certainly a fitting festival to premiere a movie of this kind. But with the avalanche of shows like “Westworld” and “Black Mirror” that deal with these topics, the movie premiere is simply one of the ways we can see tech’s imprint on our culture.

Google Home or Amazon Echo? It’s a huge question among those testing the digital voice assistants revolutionizing the future of search and the mainstreaming of a “smart home.” Amazon may have an initial leg up with Echo over Google and Apple’s HomePod — Alexa hit the market first — but Google is playing catch-up with massive marketing splashes at CES and now SXSW.

The tech giant turned a house in Austin into a huge advertisement for Google Home by connecting everything from blinds to appliances to Google Assistant, and showing people how such a Google home could function. A sign in front of the house, “Make Google Do It,” reinforced the concepts behind the gadgets, which included a sock-sorting robot.

But the battle for the voice is very much at the center of a smart home. With voice technology continuing to evolve (and the stiff competition against Amazon in this market), Google is also testing custom voice commands and working with third-party publishers to keep users engaged. Magazine publisher Hearst, for example, is partnering with Google to support subscriptions that can offer news alerts and daily “wisdom” in whatever areas a user prefers.

This sounds a lot nicer than Alexa laughing at you (a recent tech glitch). But it’s safe to say that Google and Amazon are in a tough battle in this department. And Apple is knocking at the door, which will push all the companies to do better.

From Russian trolls hacking Facebook to YouTube’s war with misinformation and Trump’s tweets, technology is now tightly intertwined with political life. And the presence of politicians at SXSW and conversations about news and politics were inescapable.

There was Mark Warner, U.S. Senator from Virginia, on “Hacking our Democracy and Discourse.” Discussions on policy and regulation with “Tech Under Trump.” Another panel on curtailing patent trolls, patent regulation, and U.S. Supreme Court cases that are bringing reform. And let’s not forget former presidential nominee and U.S. Senator Bernie Sanders — endearing to many for his grouchy take on trends, but who has now made his first appearance at SXSW, in a conversation with CNN’s Jake Tapper. And Ta-Nehisi Coates remarked on the tendency among journalists to still not give Trump supporters credit for knowing what they were doing when voting the president in. 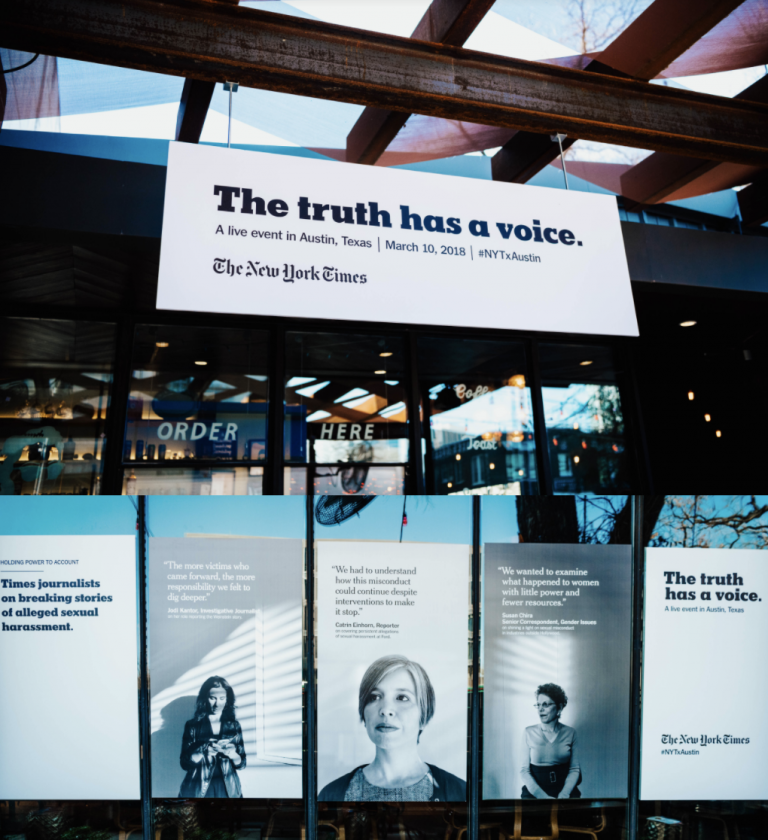 Then there’s the begrudging and critical look at the news cycle and national reckoning over #MeToo. Christiane Amanpour made it clear that the battles she thought she won in the ’90s are still taking place today — like continuing to be the only woman in the room. Amanpour boiled the situation down: “We are at peril and at risk if we don’t know the difference between truth and lies…Truth and lies are the only thing that separates us from democracy and dictatorship.”

It was the perfect underscore for the New York Times’ recent marketing campaign, also present at SXSW. Over social hour and drinks at the bar, attendees could leave with a Times button defining our era: “Truth. It’s more important now than ever.” And at SXSW, the importance of truth, politics and ideas seemed to drown out the newest apps and tech gadgets.