The press worked itself into a flurry last week about missed projections, mergers, acquisitions, staff reductions, doors closing, and political influence across its own industry. Amidst this activity, there is real momentum and honest discussion of the challenges in building a sustainable 21st century digital news and entertainment business. And there is opportunity knocking. Newly compiled DCN member research shows early signs of marketer investment moving upstream towards quality content with sequential quarterly revenue growth for DCN members. News and entertainment companies are transforming into truly diversified revenue machines that are less dependent on advertising. More importantly, DCN’s “duopoly” analysis continues to reach wider circles of influence (and understanding) with reporters, think tanks, academics, and lawmakers now asking tough questions of both Google and Facebook.

Therefore, it’s puzzling to see these two companies operating with blinders on as we watch their reactions to inquiries from the press, partners, and lawmakers. It should offend us all that, despite gob- smacking earnings this month, Google is attempting to double-down on its argument that their platforms are merely weather-machines innocently reading data rather than a major source of the media storm itself.

It certainly offends me.

In a speech last week to the Society of Editors’ at The Tamburlaine Hotel in Cambridge, Ronan Harris, Managing Director of Google UK and Ireland, fed decade-old Google arguments into the winds, despite the current media climate. While acknowledging that, “the open internet has turned business models on their heads and raised all kinds of new questions and challenges for us all,” Harris systematically tried to distance Google from any negative affect and control over the demise of news media and its societal consequences. By opening his talk on the uniqueness of the company’s role, Harris makes his Google-eyed perspective clear with the company’s classic “But we’re a search company” retort to any attempt to hold them to the standards to which responsible media companies gladly adhere.

However, this particular PR rhetoric is far from the most egregious that Harris wove into his talk. As the UK’s News Media Association observed, my visceral response to some of Harris’ points—which I first expressed on Twitter—was that he was trying to reshape the escalating duopoly narrative. You have to wonder if he’s being willfully ignorant or overtly resistant to the discussion happening in every corner of our industry.

Harris attempted to refute the simple math that demonstrates how Google and Facebook capture a majority of the growth across western media’s digital advertising by stating he’s “heard lots of people say that Google and Facebook are ‘ruthlessly stealing’ all the advertising revenue that publishers hoped to acquire through online editions. That analysis just isn’t right.” He went on to claim that these analyses conflate search and display while boasting about the amount of traffic Google drives to publisher’s sites “for free.”

Huh. Let’s break that down, shall we?

This notion of an internet advertising duopoly is not based solely on Google and Facebook’s shared and growing dominance of digital advertising. Rather, it considers that the two share a core business model that leverages “free services” that collect inordinate amounts of consumer data in order to micro-target advertising at a massive scale. Importantly, Google and Facebook suggest that because their services are free, they can’t commit consumer harm. They do this by using the Chicago School of antitrust theory out of the 70s and 80s, which is now being questioned as competition law experts attempt to consider these issues in the context of our 21st century world. This is already something the European Commission is addressing in its fines of Google. And just last week, multiple Attorney Generals joined in Europe’s concerns. Regardless of your view on antitrust law, the point is that Google and Facebook have the same business model and their dominance begets more dominance.

Another shared trait between the duopolists is that much of the information that they are able to collect about consumers is based upon the content that they discover on these services. As any premium publisher can attest, you learn a lot from audiences by what they choose to read, watch, and share.

But that’s something Google knows all too well. This is a company that owns 96% of the mobile search market and 67% of search overall. Harris crowed about driving “more than 10 billion clicks a month to publisher websites — for free — from Google Search and Google News.” But the reality is that search—as a concept, much less as Google’s foundational business—would not exist without publisher content.

Another argument that Google’s Harris made was that publishers only share a minority of the revenue from their own sites with Google. This is an argument from a decade ago that fails to recognize Google’s dominant lock-in for search and data collection across the web, which is what they are actually monetizing—in a massive way. Yes, most publishers keep a majority of the ad revenue on their own sites—after they’ve paid out the significant costs for programmatic/automated delivery. But Google also has trackers (data collectors) on more than 750,000 of top 1 million sites. And, not even the biggest publisher has leverage to negotiate with Google to limit their data collection and use practices. This data collection allows Google to target audiences using the cheapest inventory and cheapest suppliers possible. (And for now, let’s not even go into the dank, dark places ads end up with this particular approach.)

Harris also claims that analysis of Google’s dominance in digital advertising “conflates two markets: search and display.” The majority of Google’s revenue comes from showing highly relevant ads when you search for a particular term.” In fact, in this way, search and display are not actually that different. Both target direct marketing ads based on data collection. This is what most of digital advertising is transacted on. And as we know, Facebook and Google are empires fueled by data, so this statement is more than disingenuous. It is absurd.

Harris points to the lack of advertising on “Google News” as a clear sign that Google isn’t trying to compete directly with publisher’s hard-wrought news business. The fact there is a “Google News” vertical is something most people outside of industry don’t even understand. People are searching for and discovering news and information through many Google sites and channels (including YouTube and general search) where Google drives significant revenue—and data. Even though there aren’t traditional ads on Google News pages they are most certainly still monetizing that area of their business. 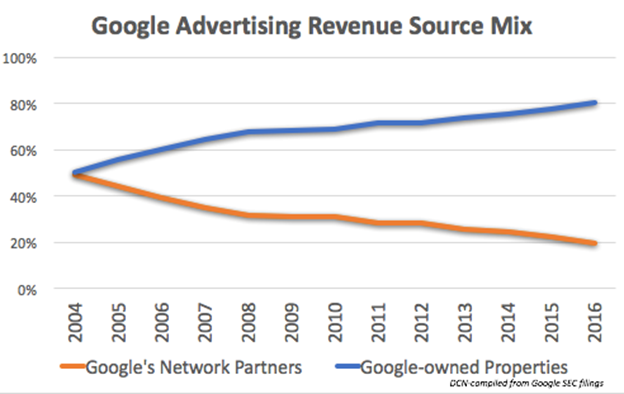 Additionally, over the past five years, Google’s own revenue mix has migrated from Google’s network of publishers (where they have the lowest margins and includes their AdSense text ads and DoubleClick ads which serve across the web) to Google’s owned and operated businesses (where they have highest margins and includes sites such as Gmail, YouTube and Search). Google controls this effect.

And here’s part of Google’s business model that Harris didn’t cover: ad blocking. The fact is that many EU pubs lose more than 30% of their site advertisements to ad blocking software which significantly impacts publisher revenues and the ability to pay for newsroom jobs. Google’s recent decision to include an ad blocker in its own browser is not the biggest issue here. Google has admitted to subsidizing major ad blockers in order to service the “whitelisting” of Google’s own ads. Let’s be clear: Google is paying companies that develop ad blocking software. Meanwhile, Google is also the dominant company in discovery, distribution, and delivery of ad blocking software. While the rest of the industry is bludgeoned by ad blockers, Google’s payments protect what is likely billions of its own revenues on its highest margin products from the effects of ad blocking yet they refuse to disclose the details of these deals.

That speaks volumes about the company’s priorities and tactics. Is this the behavior of a company that genuinely cares about the future of the media business? Harris claims that Google wants “to act thoughtfully and responsibly in our relationship” with the media industry. I can unequivocally state that transparency here would go a long way.

I don’t disagree with every point that Harris made. As he said, “as more and more people interact with news in different ways, we need to take advantage of new digital tools and capabilities to develop new experiences and sustainable business models.” Believe me, digital media executives are thinking about this every single day.

And while Harris claims that we’re misunderstanding who they are and what they do, I think we actually have a pretty good idea how they are making money and where publisher content fits into the mix. We get it, Google: You hire really smart people to create your products and your PR pitches. But don’t think that means we’ve lost sight of the value of premium content and the fact that we should be able to sufficiently monetize it in order to continue to support the journalism Google purports such esteem for and derives so much revenue from.

It’s been a full year since DCN sent a letter to Google and Facebook asking for moonshots to better serve the news industry. Facebook spent a full year dodging tough questions while at times demonstrating signs of early self-awareness of the problem. Google, on the other hand, has acted like a monopoly with its much more advanced lobbying machine. The fact Google is turning up its spin in the UK and putting Facebook out front to take the shrapnel in Washington should concern us all. It certainly concerns me.