A study conducted by International Center for Journalists survey set out to answer a critical question: Are journalists keeping pace with the digital revolution? Despite making strides in leveraging new technologies, the study concluded that the answer is no.

The State of Technology in Global Newsrooms takes a deep look at the adoption of digital technologies at a wide range of news media organizations worldwide. Working with Georgetown University, the International Center for Journalists conducted the study in 12 languages, and received more than 2,700 responses from journalists and newsroom managers in 130 countries.

The report examines technological investment, use, and staffing across different types of newsrooms in the digital age. ICFJ identified three newsroom types based on their primary distribution platforms:

Today’s newsrooms have access to a multitude of new platforms and formats — from social media to mobile apps to virtual reality, which they use to distribute their stories and reach wider audiences. Though the range of tools has expanded, the news industry relies heavily on the two social media giants: Facebook and Twitter.

Though digital-only and hybrid newsrooms are more likely to use Facebook, traditional organizations (which use digital but not as a primary distribution format) are not very far behind. Three-quarters of traditional newsrooms reported using the social media site to push out content, compared to 93% of digital-only and 91% of hybrid. 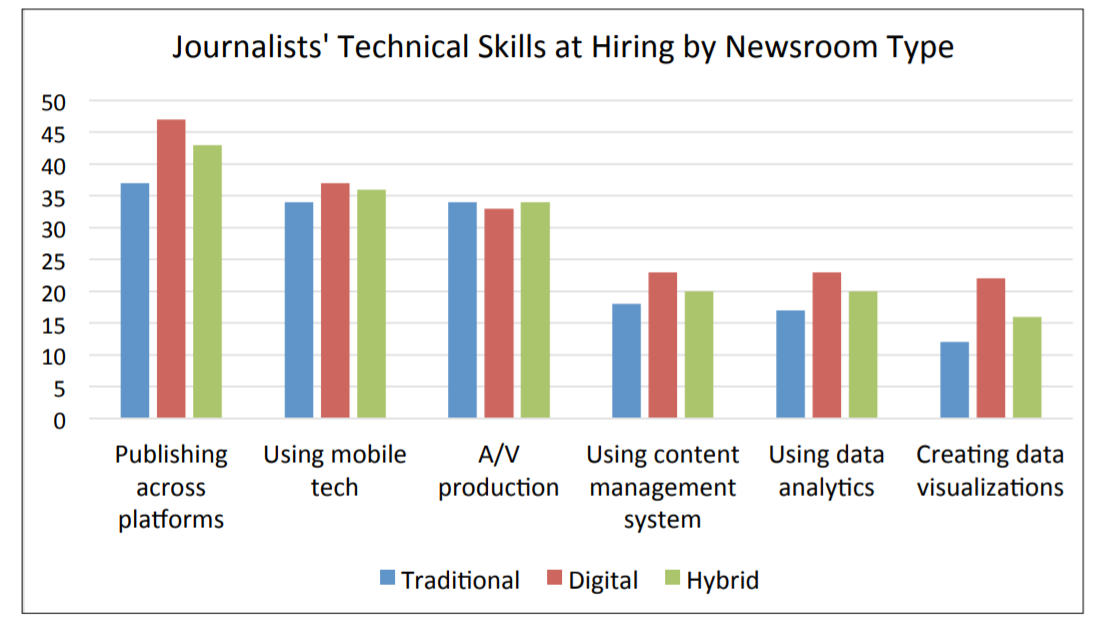 Hybrid and digital-only newsrooms are more likely than traditional newsrooms to have digital content producers/editors and tech professionals on staff, though the number of these positions remains small compared to established roles.

The study shows that many journalists are hired into their positions without experience working in digital media or significant digital skills. While on-the-job-training remains an essential tactic for staff-strapped media newsrooms. However, news professionals almost universally agree that training is important to help them meet the demands of their job.

As the report points out, the digital era is forcing newsrooms to adapt to a constantly evolving space. They face an array of major challenges, including shifting revenue models, attracting loyal advertisers, engaging audiences, and developing new storytelling formats. While journalists (and the media organizations they work for) continue to experiment with a range of digital tools, the report makes it clear that continued investment, innovation, and development of the digital skillset is required.