At Facebook’s annual F8 developer conference last year, executives touted the rise of chatbots. These automated personalities within the Messenger app promised to answer your queries as seamlessly as a human — or so was the expectation. But in fact, mismatched expectations regarding the purpose of the service, the lack of strong AI to back it up, and lack of awareness by the public left many industry analysts doubtful of chatbots’ ability to fulfill the hype.

With this year’s F8 conference upon us,Facebook is trying to shift the gears on this with the announcement of “group bots” within Messenger, a new Discovery tab for bots and more commands related to bots in Facebook’s virtual assistant M. But it looks like the social giant must also do some inward scrutiny — and involve marketers — to get users on board in much bigger numbers. 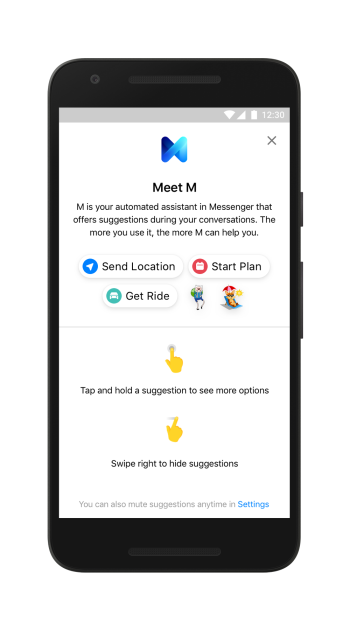 The Promise of M

When Facebook released M to a select group of some 10,000 California power users in late 2015, the promise of the virtual assistant was usurped by insight into how it could maintain such intelligent operations. “M is so smart because it cheats,” as MIT Technology Review’s Tom Simonite put it succinctly. Unlike other virtual assistants, which admit defeat when a question stumps them, a human being “invisibly” stepped into the role of the bot to cure the disease of not knowing — without ever letting the user know otherwise.

Of course, this is an expensive design to scale for Messenger’s 1.2 billion users. But M — along with competition from Siri and Amazon’s Alexa — inevitably laid a foundation for misrepresenting how users might realistically benefit from such a chatbot.

Siri and Alexa are trained to be generalists. However, Facebook has largely pushed developers to create more specialist bots. Of the more than 30,000 bots on Messenger, most of them serve a single purpose. That, in itself, makes creating a habit of use difficult. After all, unless you truly have an affinity for pizza, how many times will you use Domino’s Messenger bot in a single week? But Facebook also let the promise of chatbots spiral downward by not doing enough to inform and educate users on how to best use them.

That brings us to the twin disorders plaguing chatbots: discoverability and bugginess.

There was no native way on Messenger to find a chatbot, so unless a user already knew the name of a bot to type into Messenger’s search box, there was no way to actually use one. While third-party bot browsing options like Botlist exist, they are little-known and thus, little-used.

In part, that’s what Facebook hoped to address when it announced a new class of group bots to work inside Messenger at this year’s F8 conference. Once one person introduces the bot into a group conversation, everyone will know about its existence (although how to get that first user to know of the bot remains a looming question). And whereas users might have previously been misguided into thinking chatbots could be true, humanlike discussion partners, these group bots are meant to be more “information bots” (think scores and or stock prices) rather than “chat bots.” Feeding chatbots enough data to maintain conversation flow, and ensuring the AI was up to task, were hopeless hurdles that have made “bugginess” a default bot personality type.

That people have spoken little about chatbots since their initial hype may actually work in Facebook’s favor if it wants to reset people’s expectations. With little regard and much ignorance about the service (in fact, a November 2016 online survey by Publicis Groupe’s Digitas LBi found 78% of U.S. adults hadn’t even heard of chatbots), Facebook could help bring the popularity of chatbots outside the music fandom crowd into the mainstream population.

Can Payments, Marketing Pave the Way?

Kik CEO Ted Livingston, for one, argues the real benefits of chatbots come from their enabling the offline world around us, rather than functioning solely as app replacements. Paying for items is one way to do that And, if U.S. chatbots can make that territory theirs, they’d follow in the footsteps of China, where it’s common for QR codes to trigger interactions, and where more than 600 million WeChat users use its peer-to-peer payment service. While Kik is in talks with its Chinese counterparts to introduce payments, Facebook has already launched this option. Still, addressing Facebook’s buggy bot issues is necessary for users to trust making financial transactions.

Yet aside from all the hype and wonder, there is huge potential for publishers and marketers to seize control of the potential for bots — if they can seize control of the AI and have a common goal for users. Just like voice assistants, bots can get smarter over time with the right technology enabled. Another issue is that a simple question to a bot can yield multiple responses. However, if the aim is to get the user to do something specific — whether it is go to a website, make a purchase, or look up a news item — the answers need to actually be both human and robotic enough to do just that.

It’s not only Facebook that has to do some inward reflection on bots — marketers and publishers must too. They must also demand that Messenger (or any other messaging platform) be the right kind of environment for their goals to thrive. This involves much more nuanced AI programming to make brand interaction a clear-cut goal. It also requires much more education by both Facebook and marketers to let their audiences know bots exist, without setting them up for disappointment.