Nearly all newsrooms monitor digital metrics, but many miss out on opportunities to learn from the data they collect, according to a new survey of news editors and directors by the Engaging News Project at The University of Texas at Austin.

Overall, 87% of news organizations monitor website metrics like page views or unique visitors, according to the survey of 525 editors and directors from U.S. newspapers, television and radio stations and news websites.

“Almost everyone is doing monitoring,” said Talia Stroud, director of the Engaging News Project. But in many newsrooms, that’s where analytics work stops.

Few news editors and directors report using the data they collect to actually help solve newsrooms problems — around audience engagement, page design or revenue development, for example. For the most part, that’s a missed opportunity to draw useful lessons from analytics.

“The part to me that was just so interesting, there’s a use of these metrics, but not the second part, testing, learning,” Stroud said.

On the opposite end, just 12% of newspapers partnered with researchers and a meager 5% employed A/B testing. They survey allowed respondents to self-identify the medium, such as newspapers, that was the highest priority for their news organization.

“For several of these practices, we think that there’s a lost opportunity. For A/B testing in particular, the use of this practice can help to inform newsroom practices based on audience preferences.

Stroud pointed out that a high percentage of survey respondents, including editors and publishers, couldn’t answer whether or not they were using A/B testing. That suggests to her an opportunity as well as a need for further education.

“There’s a lot of work to be done to show what the benefits are,” Stroud said. Newsroom culture and technology both present hurdles.

The study isn’t a representative sample, Stroud cautions, but as a snapshot of newsroom practices, it’s a useful data point for researchers.

Other Ways Audience Metrics Are Being Used
The survey also asked editors and directors about several common audience engagement practices and found that television stations are most likely to reward performance based on metrics, followed by digital outlets: 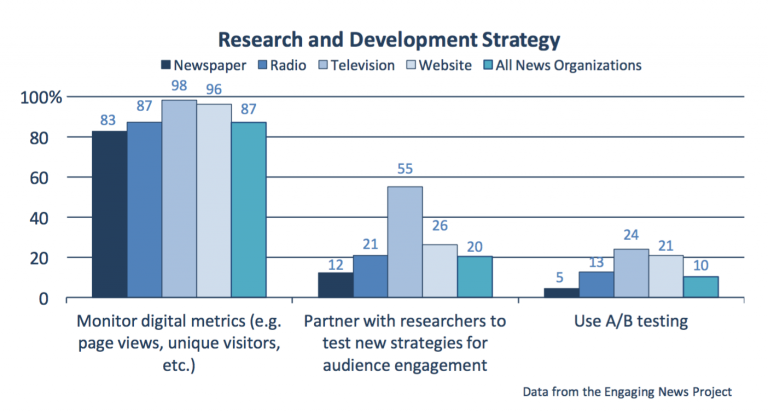 Between four and six in ten newsrooms has an audience engagement person on staff. The job titles for that role are anything but consistent, reflecting the gray area in which engagement staff often work. The three most common titles — audience development director, engagement editor, and community editor — make up just 46% of the total. 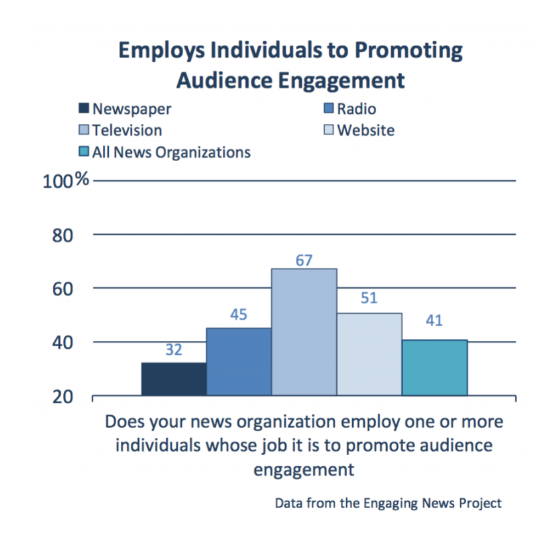 On the other hand, more than one in ten news organizations surveyed — and 17% of newspaper newsrooms — didn’t report monitoring website metrics at all, perhaps a result of the survey sample, more than half of which were newspapers with fewer than 25,000 weekly circulation.

How Newsrooms And Researchers Can Work Together
Researchers from the Engaging News Project have worked with real newsroom data before, from the influence of clickbait headlines to an analysis of 9 million comments from the New York Times.

Stroud’s advice to newsrooms that aren’t yet working with researchers is to simply reach out, especially if there is a university in your market with a journalism or communications programs. And come prepared with questions your newsroom has, she said. Not every newsroom problem will be of interest to researchers and what researchers are interested in may not solve immediate newsroom problems, but there will likely be a sweet spot in the middle.

“What questions does your newsroom have? Bring those to the table, say ‘What do you think?’” Stroud said.

The full Survey of News Editors and Directors can be found on the Engaging News Project website, along with more of the team’s news audience engagement research.

Jason Alcorn (@jasonalcorn) is the Metrics Editor for MediaShift. In addition to his work with MediaShift, he is an analyst with the Media Impact Project and works as a consultant with non-profits and newsrooms.