At least since the Sony Betamax case, content creators and the law have struggled to keep up with the technological advances in piracy. Just this year, HBO hired anti-piracy partner, IP-Echelon, which sent out thousands of copyright warnings for alleged piracy of its popular series “Game of Thrones” to internet service providers. The warnings contained the IP addresses of users suspected of sharing “Thrones” episodes. HBO’s and IP Echelon are still monitoring this situation and consider it critical to their business.

It turns out that online video streaming is now the primary means of pirating video content. In contrast, a decade ago peer-to-peer file sharing via torrent websites was the top method to download pirated video files. New data from the MUSO’s Global Film & TV Piracy Market Insight Report 2016 provides data showing pirate streaming sites had more than 57 billion visits last year. Out of the total 78 billion film and television piracy site visits, 74% of all visits to piracy sites were to those that stream content illegally.

MUSO’s analysis reports on over 14,000 visits to the main global piracy websites from 226 countries. Overall, MUSO tracked 141 billion visits to pirate sites last year. The U.S. tops the list of video pirate visits, representing 12% of total traffic, almost 10 billion visits. France, Germany and the UK are all included in the top 10 countries globally based on total piracy visits.

Torrent site traffic has shown gradual decline for illegal video content consumption. Approximately 17% of the piracy traffic went to torrent sites and direct download sites accounted for 8% of video piracy visits. Users predominately use desktops on both streaming pirate sites and torrent sites, 72% and 77%, respectively. Therefore, mobile piracy remains comparatively small. Interestingly, mobile download registered a slight increase (5%) in visits from the first 6 months to the visits from the last 6 months in 2015. However, the usage of downloads was still relatively low, compared to torrents and streaming traffic. Overall, the piracy environment is engaging in streaming consumption versus content downloading or sharing. However, piracy tactics have not transitioned to mobile at the same pace as other content consumption habits. 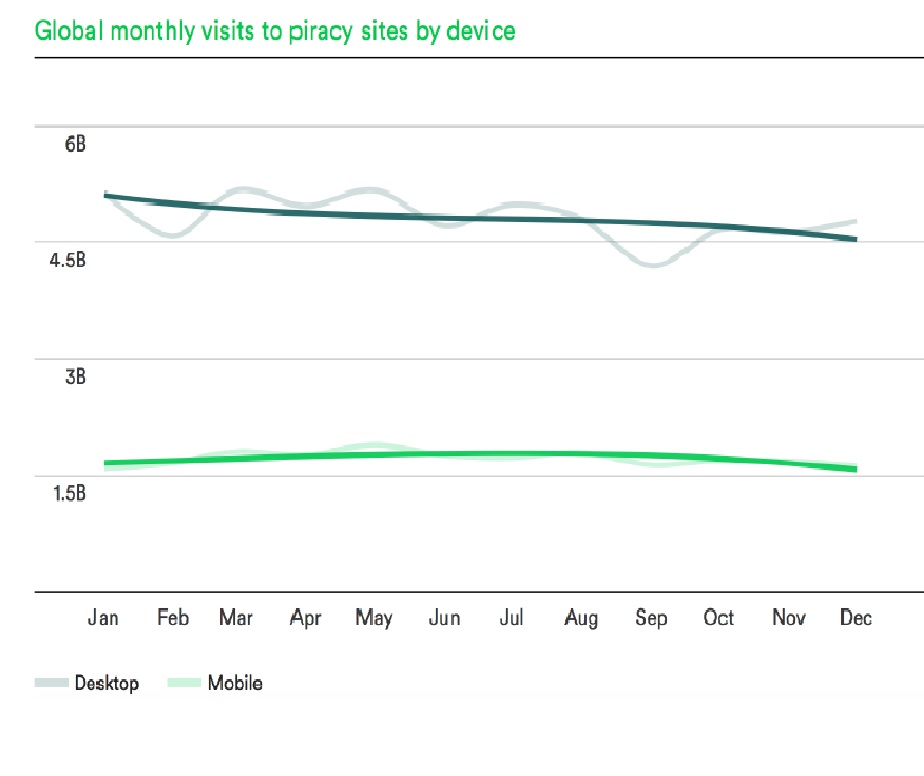