Ad blocking on desktop has been a thorn in the side of publishers for years, but it’s the advance of ad blocking on mobile and built into browsers – and the stunning growth trajectory of ad blocking usage across markets including China and India – that poses the greatest threat to digital media companies that depend on advertising for revenue.

This is the key takeaway of Adblocking Goes Mobile, a recent report published by Page Fair, a company working to mitigate ad blocking with the help of technology it claims addresses the speed, privacy, and UX issues that cause ad blocking in the first place. Drawing from research and analysis of ad blocking browsers and capabilities conducted in collaboration with app intelligence firm Priori Data, the report sheds important light on the factors driving the meteoric growth ad blocking around the globe.

While mobile ad blocking browsers have become a mainstream technology, there are important differences in how and where consumers block ads in their content and news. 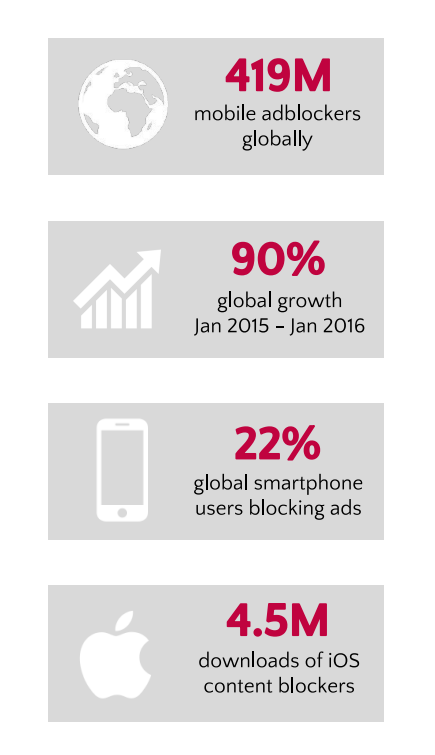 The mass adoption of ad blocking browsers in markets including China, India, Indonesia and Pakistan means massive problems for digital media serving those markets. As the report puts it: “Mobile ad is a serious threat to the future of media and journalism in emerging markets, where people are coming online

for the first time via relatively expensive or slow mobile connections.”

Ad blocking usage in North America and Europe is not as widespread, thanks to developed mobile data infrastructure and affordable data plans. But there are also distinct differences. Ad blocking browsers are popular in Europe, while content blocking apps (apps that block ads in web pages viewed via a Safari browser on Apple’s iOS 9 Apple devices, for example) are 3x more popular in North America than in Europe.

It’s important to have a report that draws from empirical data, not user surveys, to understand the increasingly complex landscape of mobile ad blocking technology. Now it’s up to the media and publishing industry to use this report as a starting point to address the root causes and issues that are convincing consumer to use adblockers in the first place.

Fortunately, the report takes the first steps, inviting industry leaders and associations – including Digital Content Next – to weigh in with their opinions on the rise of ad blocking technology and why a focus on delivering a better user/reader advertising experience should be top of mind with all digital media companies and brands.

But the elephant in the room is not the quality of ads but the disconnect between how the industry approaches monetization and what they should really value. Perhaps David Chavern, CEO, Newspaper Association of America, sums it up best: “We [also] measure digital ads by a metric — “impressions” — that has no real meaning or value. If we don’t fix these problems, and we allow ad blockers to take over, then we will be left with small, subscription models that will exclude large portions of the public. Not being able to afford HBO is one thing. Not being able to afford quality news would be a much more serious problem.”