We live in a highly connected world these days with nearly half (45%) or 3.3 billion people using the Internet by the end of 2016.  A majority of these users, 2.6 billion, are accessing the Internet using a mobile phone reports eMarketer in their roundup of media usage measurements from around the world.

The increase in digital access provides a surge in television viewing. This year eMarketer estimates that 205.7 million U.S. adults will watch TV through traditional channels while 129.7 million adults will watch digital TV. Access to over-the-top TV and the abundance of new content from Netflix, Amazon and Hulu has also contributed to the growth of the digital marketplace.  It’s predicted that by 2018, U.S. adult viewers of traditional TV will drop to 202.1 million while adults watching streaming TV will increase to 138.8 million. Industry experts expect traditional television viewing shifts in favor of digital streaming services given all the new content and the ability to view on multi-platforms.

Viewership by demographics points to some big differences. The biggest consumers of total digital video consumption which includes TV shows, movies, news, and even advertising are the millennials. eMarketer estimates that 93.7% of millennial internet users will watch digital video content in 2016 and grow to 94.1% by 2019. In particular, nearly all (96.5%) of adults 18 – 24 internet users will watch streaming video this year.

Consumers worldwide are accessing lots of different content on mobile from social networking sites to messaging apps to streaming music to digital TV. Mobile has been the first digital screen for many throughout the world especially in Africa, Asia and Latin America. Further, usage of mobile messaging apps grew to 1.4 billion consumers in 2015, an increase of 32% from the prior year. eMarketer predicts that by 2018, mobile chat users will reach 2 billion or 80% of smartphone users. WhatsApp and Facebook Messenger, both Facebook owned, are seen at the two most powerful apps globally.

The growth of video streaming and mobile messaging continues to provide publishers and marketers with new opportunities to reach consumers. The variety of content from high quality to consumer generated and the ability to share instantaneously offers a social extension for marketers to use both domestically and abroad. 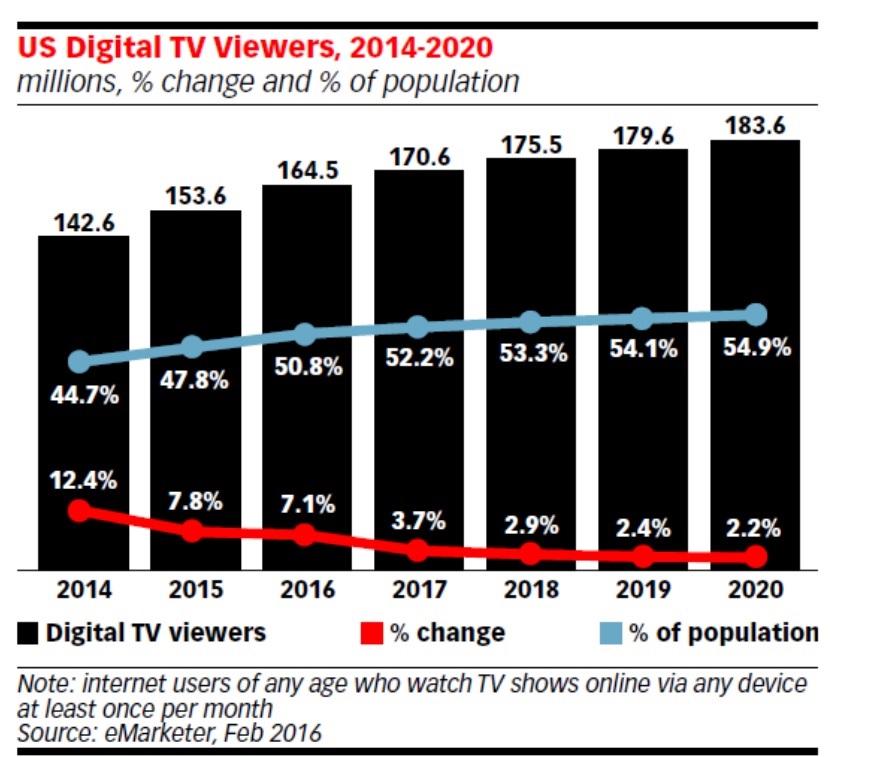