What does this mean for the future of the Internet publishing and advertising? The ad industry anticipates losing $21.8 billion globally in blocked revenue this year with $10.7 billion in the U.S. alone. This figure is set to almost double by 2016 when the global cost of ad-blocking is expected to reach $41.4 billion.

What’s driving adoption rates? User adoption of Google Chrome and its easy installation of ad blocking extensions grew 51% from 44 million monthly active users in 2Q 2013 to 126 million in 2Q 2015. Further, while mobile only accounts for 1.6% of ad blocked traffic, new operating systems such as Apple’s iOS9 will make it easier for consumers to block mobile ad traffic. It’s the first time app Apple will allow app makers to develop ad blocking software for iPhones and iPads. Usage of ad blocking on mobile is expected to increase exponentially.

What do these ad blockers look like? Consistent with prior research, ad block users are typically, young, technically savvy, and more likely to be male.

Why are users blocking ads? PageFair and Adobe also surveyed 400 internet users asking what would drive them to use ad blocking software. The top two responses reported “misuse of personal information” (51%) and “an increase in the number of ads” (41%). 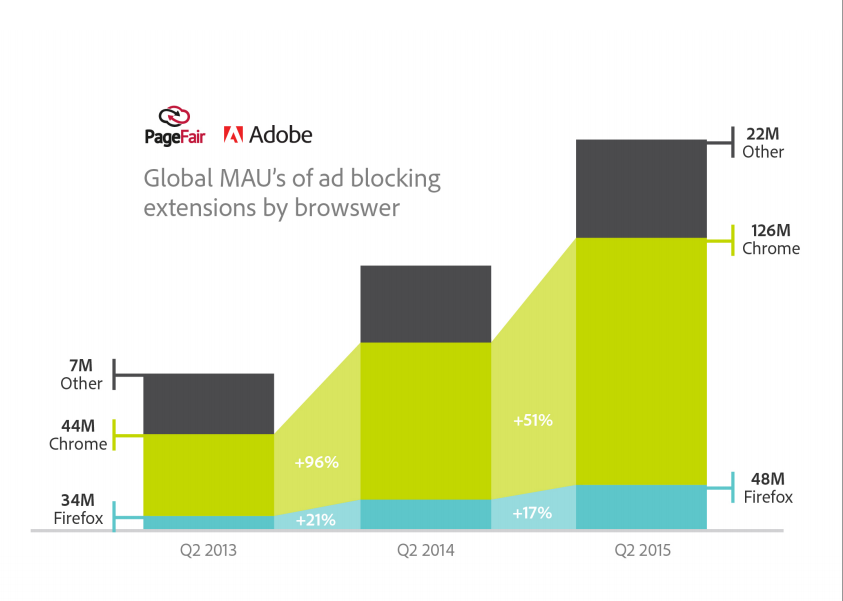