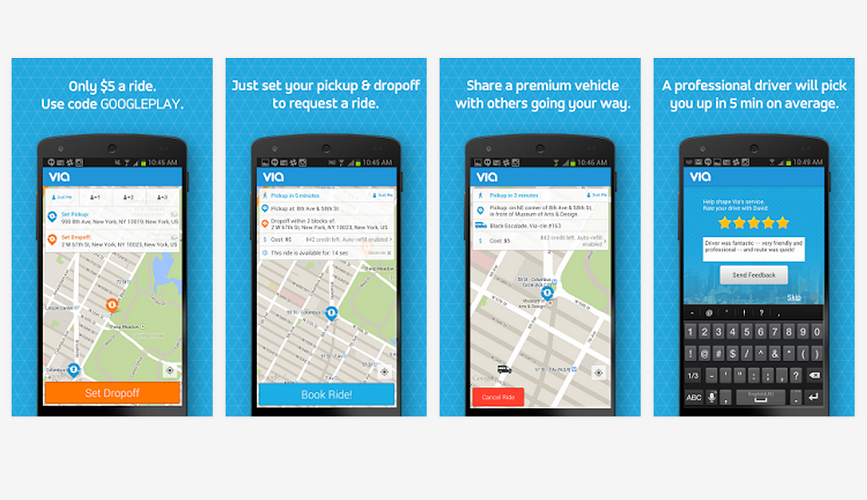 Hearst Ventures is always on the lookout for the next big thing in the technology space that can help impact consumers’ lives. The group’s newest investment, ride-sharing company Via, shows big promise in the on-demand transportation sector and has a unique business model that provides an attractive price point and sophisticated technology that differentiates the company from the ever-expanding market competition.

Can you give us a brief background on Via?

Frisch: Via is a ride-sharing service that allows you to reserve a seat in a car using an app on your smartphone. Using Via’s app, customers drop a pin in the location where they’d like to be picked up and where they’d like to be dropped off. Via’s technology matches the request with a nearby vehicle that can fulfill the ride, and dynamically coordinates the route to include other users going in the same direction.

We think there is pent-up demand for transportation alternatives in Manhattan and other major metro areas. Via offers a solution to riders who want to share the cost of their ride, but are looking for, and willing to pay for, more convenience and comfort than what is currently offered by mass transit.

What Hearst Ventures finds particularly compelling about Via is its software platform: an automated dynamic routing system optimized for many variables ranging from traffic conditions to predicted demand along routes traveled. The software—not the vehicle driver—chooses the route and ensures that the customer will always be picked up and dropped off within two blocks of their pin drops. It automatically communicates critical information about the location of the vehicle as it approaches and clearly instructs the customer, through the app, on where to meet their driver and vehicle.

Can you talk a bit about Via’s plans for expansion?

Frisch: Via has been expanding its service in Manhattan gradually over the past year or so and demand for the service has been extraordinary. At the time Hearst invested, service was operating limited hours and in a zone from 32nd Street to 110th Street. Very recently, Via announced that it was extending its hours of operation to be 6:30 a.m.-9 p.m. and expanding its service zone to cover from 14th Street to 110th Street, river to river. Via also has plans to expand into other metro areas in the U.S., and eventually internationally. The first two targets will likely be Chicago and Washington, D.C.

Tell us a little about Via’s pricing model and how the company keeps costs so low.

Frisch: There is a pre-pay option on the app where customers can use money they have already loaded, at the five dollar per-ride price. If customers pay for each individual ride, the cost is seven dollars per ride. If there is more than one person being picked up, each additional rider is charged at 50 percent of your per-ride price. The company keeps the cost low by matching vehicle supply and customer demand. The drivers are independent contractors, licensed by the New York Taxi and Limousine Commission, and are called to work based on what Via expects demand to be on a given day, at a given time. Fully utilized, a vehicle can make three to three and a half loaded trips per hour. Ideally, Via’s vehicles will run at full capacity, but there will always be times of less-than-full utilization. The supply of drivers and vehicles is being managed to grow with demand for the service. The two will expand together.

Tell us more about the founders and the team behind Via.

Frisch: The founders, Daniel Ramot and Oren Shoval, are impressive entrepreneurs. In their home country of Israel, they grew up with Sheruts—shared taxis and vans—that are a popular and effective means of transportation. Ramot and Shoval are both graduates of the elite Talpiot program of the Israel Defense Forces, and clearly have the engineering skills, training and experience that made them able to build the Via technology and successfully roll out the service in New York. Their team is divided between New York and Tel Aviv. The engineering team resides in Tel Aviv, under Shoval, and the operations and marketing teams are based here in New York with Ramot.

What separates Via from some of its competitors?

Frisch: We think there is a lot of room for new transportation solutions in Manhattan. Via is offering a new type of service that combines the low price and sharing aspects of mass transit with the personalization and convenience of a for hire taxi or limo ride. Also, the software and technology platform that I described before is a defensible advantage that Via has over its competitors.

What about Via ultimately made it an attractive investment for Hearst?

Frisch: Hearst Ventures has been interested in on-demand service models and we have spent a good deal of time thinking about these businesses. On-demand transportation is particularly interesting because it is a very large market opportunity that is in its early days of disruption by smartphone hailing services like Uber and Lyft. We spent a long time thinking about the market, and Hearst President and CEO Steve Swartz challenged us to find a company for investment that offered a real competitive advantage to the market counterparts. When I came across Via, I honed-in on its technology platform as something that would differentiate the service. The automated routing system that enables the shared service and the low price point is truly groundbreaking.

Via’s management team is rock solid and their business model is new and different. The timing feels right, since well-funded companies already in the space have educated both the drivers and riders that it is very easy and convenient to transact using smartphones. With this new round of funding, Via can expand and grow more quickly. We are very excited about working with them as they do.