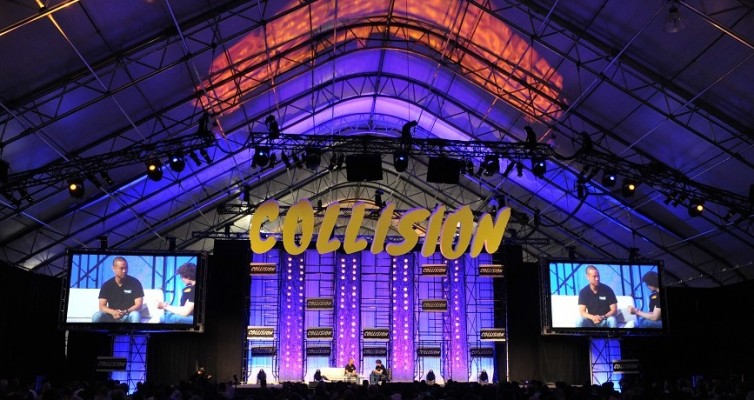 Innovation was the dominant theme at the Collision conference, which was held May 5-6 in Las Vegas. This is not surprising given that the event attracts hundreds of startups and hosts a two-day pitch competition. In fact, the event format innovates on the traditional tech conference by eschewing the standard Las Vegas strip stomping grounds for a couple of airplane hangars near the old section of the city. Collision founder Paddy Cosgrave teamed up with Zappos Founder Tony Hsieh to bring the event to this section of the Vegas as part of Hsieh’s vision to reinvent the area where he moved the company two years ago.

Cosgrave sat down with Hsieh at Collision to discuss their shared passion for innovation. Having recently announced that Zappos will become a Holacracy, in which authority and decision-making are distributed throughout self-organizing teams rather than with senior management, Hsieh is no stranger to risk taking. His goal is to inspire a new era of creativity at the company, which has swelled to 1,500 employees—a number that has led to “systemic bureaucracy” he feels is antithetical to innovation. Hsieh said that as of April 30th, there are no longer people manager roles at Zappos; nstead, he wants every employee to be a mini-entrepreneur. Though he admits that this approach won’t be right for every organization, he made it clear that innovation is a must in order to survive. Stating that most innovation is inspired by something outside your industry, Hsieh encouraged attendees to get out into the event and “collide” with unexpected people to generate new ideas; to be inspired by those outside one’s peer-group, company, and industry to prompt truly groundbreaking thinking.

This set a tone for the event, which was a hive of conversations—many among seemingly disparate individuals. More than 7,000 attendees, startup exhibitors, students and investors mixed it up on ideas ranging from new social apps for just about everything to drone grocery delivery and using your Apple Watch to help the homeless. While some ideas seemed like solutions without a problem, others sparked nothing short of awe. Two students from UC San Diego, Alex Finch and Deepak Atyam, showed off a rocket engine they’d built with a 3D printer, an idea they hope could make communication satellites smaller and more affordable. Other entrepreneurs sought to help travelers find food trucks, optimize ad budgets on the fly, and create personalized VOD channels.

However there were also those who, like Hsieh, are seeking to ignite renewed innovation from within established businesses or to disrupt long-held models. One that fits both descriptions is advertising agencies. Jeben Burr, founder of Zealot Networks and Neil Robinson, founder of Chapter noted that there has been a disconnect between product development and marketing teams that needs to be mended in order to deliver experiences that resonate with consumers. Robinson’s approach has been “to step away from the big digital agency model and build a high-density of talent; people who can be the architect of something.” Both Burr and Robinson felt that starting fresh was the right way for them to create a new approach to digital advertising. Burr added that acquisition can be an effective way to bring new life to a large organization. And while Robinson said he’s seen some organizations create incubators that do impressive work, unfortunately he rarely sees their innovation “leak out into the larger organization,” something that needs to happen in order for systemic change to take place.

Another Collision speaker, AdRoll founder Aaron Bell said that “in 1997, you bought ads online just like you did offline—with a fax machine and insertion orders.” Today, he pointed out, “there’s been billions of dollars spent in ad tech and the Lumascape has become incredibly complex.”  However, he anticipates a steady stream of startups in the space, not only because there’s money to be made, but because of the experimental spirit of marketers and their desire for continuous innovation. This opinion was reinforced by Ashu Garg, general partner of Foundation Capital. Garg said he expects to see tenfold growth in marketing software spending in the next few years because “marketers don’t want one-size-fits-all… and are looking for competitive advantage, not just operational efficiency.”

Robert Stephens who, founded Geek Squad and served as CTO of Best Buy after his company’s acquisition by the retail giant, says that the experience showed him how disconnected customer service can be from modern communication. He is bullish on the potential for instant messaging to infuse more aspects of business and customer communication.  In fact, he recently co-founded Assist, which allows travelers to text questions about an area and receive a quick response from those who live in the area. His belief is that “calling a business will be as obsolete in a few years as printing out a boarding pass.” And while Stephens’ approach is to build something new, he believes that everyone has the opportunity to look at things differently and that opportunity is not limited to young upstarts. “Large companies have the opportunity to use their powers to change things,” he said.

Change and adaptability ran strong as themes until the closing hour. Rocket Fuel President Richard Frankel emphasized the point in his talk, “the organizations that are struggling the most are those refusing to change, are afraid to change or are in change-denial.” There’s no denying change, of course. It is as inevitable as Vegas heat in May. And while it there is risk associated with internal change or a high-stakes startup, there is also the possibility of great reward.