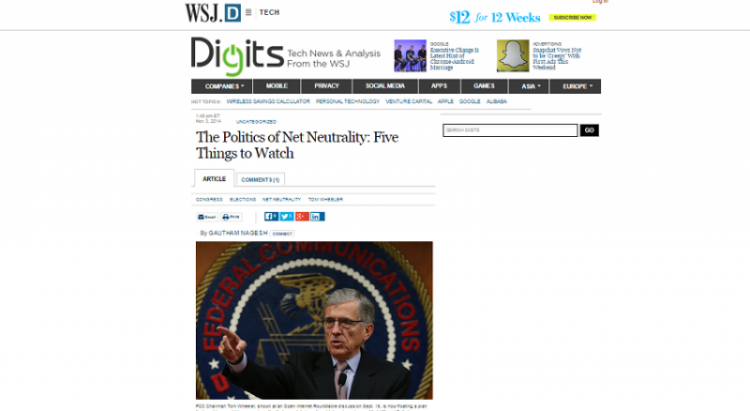 Today, on the Wall Street Journal’s Digits blog, Gautham Nagesh wrote a post called “The Politics of Net Neutrality: Five Things to Watch” in which he outlines key facets of this issue. Gautham points out  that:

Companies and Internet consumer advocates – not to mention lawyers and lobbyists – are parsing the news from last week that Federal Communications Commission Chairman Tom Wheeler is laying the groundwork for a new plan on how broadband Internet service is regulated. His emerging plan would expand the agency’s authority over broadband service. While the issue is highly technical, and legal, there are some strong political undercurrents as well.

He wisely points to these five things to watch (and takes a closer look at each in his column):

1. The plan’s effect on merger reviews
2. The timing
3. Control of Congress
4. The players
5. The markets

With regards for #2 on Nagesh’s list,  even if the FCC gets a rule done by Dec 11, there is going to be a lawsuit to challenge this hybrid proposal.  Verizon pretty much guaranteed it last week.  That could stretch out the Net Neutrality debate over the next couple of years.  And that’s the whole reason we’re in this position in the first place – because the FCC’s original plan was successfully challenged in court.

And as for #3, Nagesh may be overstating the impact of a Republican-controlled Congress on Net Neutrality or even telecom law.  First, even if Congress could pass a law to stop the FCC from moving forward with these Net Neutrality rules, the President would surely veto it.  As for telecom overhaul, the 1996 law got passed after about 5 years of debate and wrangling in Congress. And most agree that it looks like Senate Republicans face a very challenging election landscape in 2016.