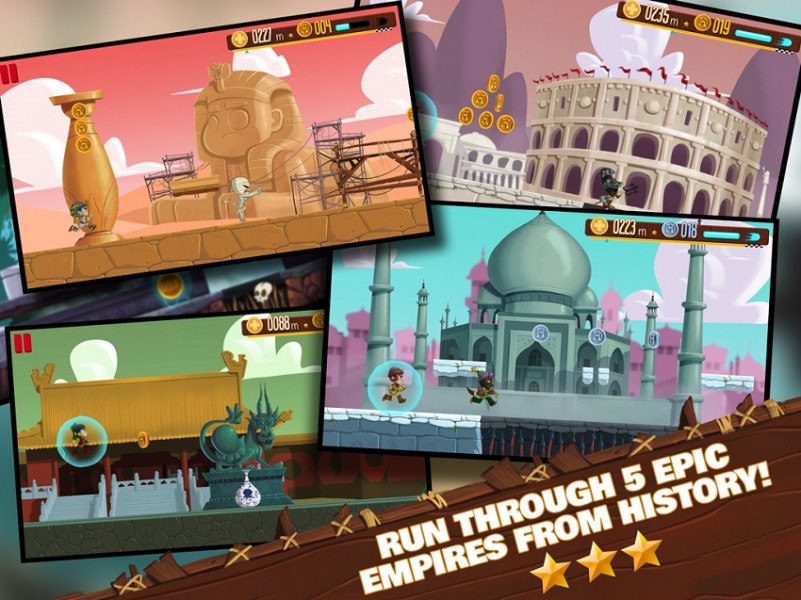 History may just be the most popular subject for 7-11 year olds this fall. A+E’s History brand– which works hard to infuse the subject with entertainment value to go along with informational substance —has just introduced two new apps targeted at kids: Empire Run and Frontier Heroes.

While there are many apps on the market that fall into the historical genre, Evan Silverman, SVP of Digital at A+E Networks said that the company “felt that there was an opportunity in the marketplace for historically-inspired apps that are fun for kids.” In analyzing the segment, Silverman says they found many of the apps lacked production value and “skewed to dry.” And History, which produces such popular programs as Vikings, Pawn Stars, and Ice Road Truckers, does not do dry.

In addition to seeing a market opportunity for fun historical apps, the cable network is “always looking for new ways to explore audiences and develop new brands within the larger History umbrella,” says Silverman. While the 7-11 year old set may not be its prime expansion demographic, the move will reinforce the brand among parents of young children who are likely to be happier approving the $2.99 app price tag given the reputation of the History brand. This certainly represents a growth opportunity, given that the network’s viewer profile is dominated by 55+ (42%) followed by the 25-54 age bracket (36%).

“We really focused on creating apps that parents would trust,” says Silverman.” The apps are part of a new “Planet H” brand, which will join  H2 under the History umbrella.  “We made a very conscious decision to charge up front and not include ads or in-app purchases. We also worked hard to create apps that parents would consider high quality and premium, and maybe even enjoy playing themselves.”

History developed its new Empire Run and Frontier Heroes apps in partnership with RED Games, a division of RED Interactive Agency. A&E Networks and RED Games teamed up previously to produce the popular Battle of the Beards game for A+E’s Duck Dynasty.

The choice to approach this audience through games also made sense given the low-cost to test the market (relative to developing a pilot or digital series). Silverman also points out that “with apps, you get a very fast read on whether something resonates with an audience: Do they like these characters, enjoy these particular historical eras?” This year, History plans to introduce one more game under the Planet H brand which Silverman will only say is an “exploration game.” However, if the games gain traction, we can expect much more.

“We don’t want this to be a one or two-off. We are making a commitment to launching a series of apps.” Silverman says that his team looked closely at the Toca Boca studio when formulating their plan for approaching this new audience mobile-first. Like Toca Boca, if they find an audience that embraces the fun in History, the Planet H brand will expand into other channels and content types including the possibility of merchandise sales and original digital programming.

“The History brand has really broadened over the years and now we speak to so many different audiences.” Silverman credits now-A+E CEO Nancy Dubuc with “genius, when she was running History, at viewing history through a contemporary lens instead of always looking backwards.” Planet H, he says, is just another step in that evolution.