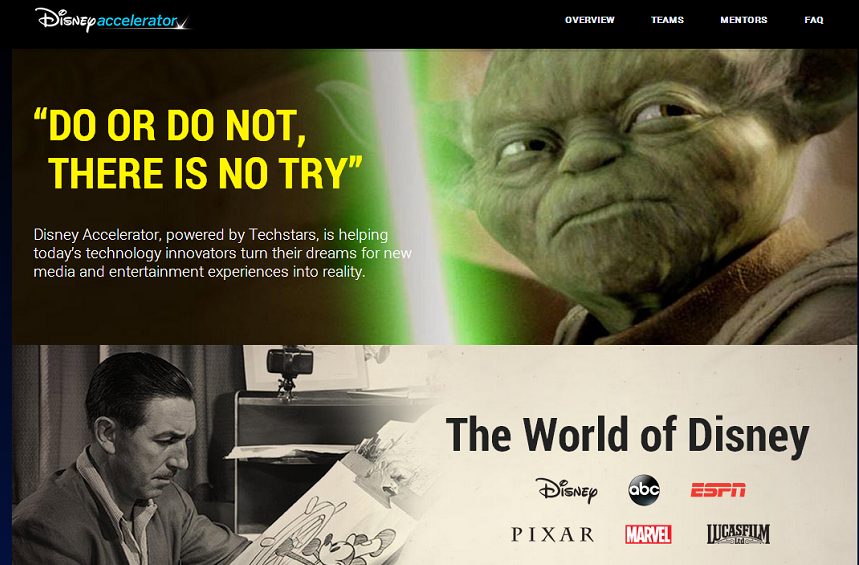 Disney has joined the ranks of Fortune 500 companies launching accelerator program. General Electric made headlines last year when it announced StartsUpHealth with the mission to build 1,000 sustainable health and wellness companies within a decade. And two years ago, Nike partnered with TechStars to create the Nike+ Accelerator Program, which is designed to drive digital sports innovation. Disney also opted to partner with TechStars, a mentorship-driven seed stage investment program.

While he notes Disney’s respect for the past, Kevin Mayer, EVP, Corporate Strategy and Business Development at The Walt Disney Company, says this initiative is an extension of Disney’s “long, storied history of innovation.” According to Mayer, “We have also been leaders in entertainment technology development with inventions like the multiplane camera, audio-animatronics, circle-vision 360° and Fantasound. I see Disney Accelerator as an extension of this legacy and a new way of bringing together the creative energies of the media/entertainment and start-up communities to inspire innovation.”

Disney Accelerator will select 10 startup companies for a three-month mentorship and seed-stage investment program which begins June 30th. Participants will receive $120,000 in investment capital to develop their ideas. They will also receive mentor support from top Disney executives, including Disney chairman and CEO Robert A. Iger and John Skipper, Co-Chariman, Disney Media Networks Group and President of ESPN, along with others from Pixar, Marvel, Lucasfilm, ESPN and Walt Disney Imagineering and the investment community.

“While the seed capital is clearly a boost for the selected start-ups, the most valuable aspect of the program is its unique access to the time, expertise and involvement of Disney Accelerator’s diverse group of mentors,” says John Kosner the EVP Digital and Print Media, ESPN who is one of the participating mentors. “These new companies will get the benefit of all the ideas, experiences and lessons learned from some of the most successful and innovative leaders Disney and its network has to offer.” The list of mentors also includes Anne Sweeney, Co-chairman Disney Media Networks and President Disney-ABC Television, Group; Jason Calacanis, CEO and Founder, Inside.com; and Alan Patricof, Founder and Managing Director of Greycroft Partners.

According to Meyer, that the Disney Accelerator “unites the start-up community and the media/entertainment industry in an effort to collaborate on new, disruptive, innovative products that could provide opportunity or value for our business and inform the future of the media and entertainment industries.”

Along with access to stories, characters, technology and other resources from across The Walt Disney Company, selected teams will also present their companies and products to industry leaders and investors during an Investor Demo Day in September.

Applications are being accepted through April 16.