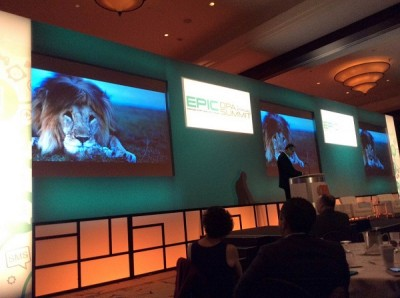 There is perhaps no more vivid depiction of the OPA slogan “Content People Love” than National Geographic’s iconic photography. So National Geographic creative director Bill Marr’s keynote set the tone at the 12th annual OPA Summit not only by showcasing the publication’s widely-lauded imagery, but also through a demonstration of the brands’ commitment to leveraging digital to embark on a new adventure in storytelling.

The iPad, according to Marr, offered the publication new life and provided a catalyst that is driving National Geographic’s entire team to reconceive of its content creation process and to rethink the ways in which its already visual stories could be told. To do so, Marr says, they had to recognize that “short form video is not television.” For them, “it is an extension of print; it is an extension of storytelling.” While National Geographic has always embraced and supported the work of photographers, now the publication is working with them to evolve their craft using video and a wide range of technologies. The brand is also physically reorganizing its content creation team—down to the office space in which they work—to create a more “open, collaborative environment.”

Marr illustrated the result of these ongoing efforts with a range of stunning examples that had a room full of seasoned media executives mesmerized. One example in particular, the National Geographic’s most popular story of 2013 “The Serengeti Lion,” features the brand’s iconic photography enhanced with audio and video and reveals the technology it used to capture these intimate images, which included infrared photography, micro-drones and a robot.
Now that National Geographic has begun to offer these deep wells of content that go far beyond what it had previously been able to deliver in the pages of its magazine, Marr says they are approaching many other aspects of their content delivery with a new perspective, such as its “The Power of Photography” exhibit on display at the Annenberg Space for Photography. Instead of limiting the exhibit to what could fit on the gallery walls, they created a digital exhibit that uses video walls to showcase 500 photographs and accompanying information from the brand’s 125 year history.

National Geographic, says Marr, has moved away from the notion that a story is “one thing.” Instead, they are working to “envision how any story can come to life in myriad ways.” This approach is generating more powerful storytelling than ever before. It has also created an opportunity to better monetize via digital subscription offerings including iPad and Kindle editions. However National Geographic’s exploration of the frontiers of digital storytelling also demonstrates how delivering these deeper offerings creates a level of engagement—web visitors spent an average of 12 minutes with “The Serengeti Lion”—that the brand believes it can leverage to generate revenue via its site as well. Marr says they are currently beta testing a new iPad-inspired site experience that will offer a premium experience for subscribers and in turn, drive its visual storytelling even further in its next 125 years.